Today’s meeting featured Catalina Rotary’s own Dr. Dick Carlson with his annual outlook on the US Economy. President Pat announced that we will be starting “Friday Frolics” when we have “dark” (no meeting) Fridays. Small groups of our members 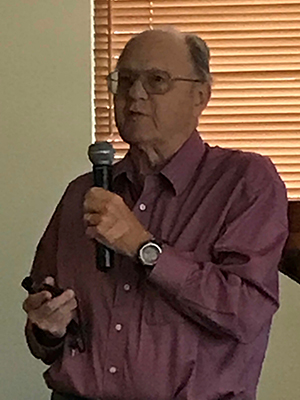 will gather for fellowship with a meal or service project. The list of groups was passed around. He also shared that members Barbara Kiernan, Bob Delaney, Dorice Beren, Pat Dwyer, Anita McDonald, and Frank Presson were on a Rotary trip to Mexico to meet potential partners for a Rotary Global Grant addressing Rural Health.

“Queen of Hearts” Phyllis James held the deck for Maria Elena who drew the 2 of spades!

Sgt. at Arms Andy Kerr went to each table with “moon-related” questions. We learned that there are two full moons in January and none in February. In the Chinese New Year this is the Year of the Dog. Andy concluded crooning his rendition of the song “Blue Moon”.

Catalina Rotarian Dick Carlson was the presenter on the topic: “US Economy 2018 – Short Term Boom/Long Term Problems. He spoke about the energy boom – finding more oil and gas in the US and Canada, inflation much lower than anyone had expected and the magnitude of the stock market boom under President Trump. The official unemployment rate is 4%.  The economy looks good on the surface with worldwide economic growth, energy sector is stable. The magnitude of the Trump tax cut is not being covered by the mainstream media. “Bonus Depreciation” is the single most important thing in the tax bill. Over 80% of Americans are getting a tax cut. Other impacts: Republicans hold the House and Trump unimpeachable. 2018-2020: “Hang in to your hats and wallets.” Haven’t had interest rates this low since 1930’s-40’s.