Today, Catalina Rotary Members received a unique view into the lives and careers of Franklin and Eleanor Roosevelt from their granddaughter, Nina Roosevelt Gibson, who lives here in Tucson. There was also a BIG DEVELOPMENT in our weekly Queen of Hearts game! Please read on…

Guest Annabelle Crite shared that her dad had served as president of the Phoenix 100 Rotary Club and was very proud of the club.

President elect Bob Grady reminded people to sign up to work at the rodeo. Volunteers are particularly needed for Thursday. He also shared that the beneficiary of the tips would be the Integrated Touch for Kids Program at the U of A.

The first ever Friday Frolics went well. The next one will be in May.

Jeff Hamstra: The tree planting project will take place at Milagro park on Saturday, April 28 in the early morning. We will plant 50 trees in the park and another 10 outside of the park area. More information coming.

Anita M gave a brief summary of the trip to Alamos, Mexico and passed around the banner and gift of a Yacky Deer Dancer from the Navojoa Club and a cookbook entitled The Joy of Mexico developed by the people of Alamos.

Anita and Dorice also gave a half leg up ($50) to the Catalina Rotary Club Foundation in honor of Bob DeLaney for the unbelievable and awesome job he did driving one of the vans for the entire trip including the 12 Hour drive back on Monday. These funds can help the club support global grant initiatives. 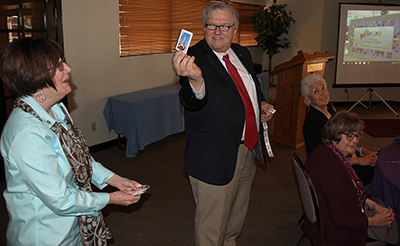 It was quite a day for President Pat who’s guest Nina Roosevelt Gibson, pulled Pat’s ticket, number 576. And, to our astonishment, Pat then pulled the Queen of Hearts from the deck held tightly by JoAnne W. for the winning pot of $739.50. Yay Pat!!   Next week we begin anew.

Irv M. played a little history trivia and said he would pay for correct answers. Well, it cost him $30 because it was a savvy group and several provided those correct answers. Due to a shortage on time, happy bucks were limited. Jeff announced the arrival of his new granddaughter and Steve P. will be the guest speaker at the Sunset Club.

Prez Pat said today’s speaker, Nina Roosevelt Gibson, Ph.D. and her husband, Nick are close friends of he and Candy at the X9 ranch. Nina’s father John was the youngest son of the former president and first lady. Nina and her siblings experienced daily life with their famous grandmother on the Roosevelt farm, “ Val-Kill” in Hyde Park,NY. Nina earned her PhD in psychology from The Ohio State University. She is a founding member of the Southern Arizona Children’s Advocacy Center in Tucson. Now retired, Nina continues her involvement as a board member of the Eleanor Roosevelt Center at Val Kill and the New Deal Preservation Society. She is also a member of the Sarver Heart Center advisory board at Banner – UMC.

Nina began with the disclaimer, “I am not an historian.” She knew her grandmother real well but her grandfather died when she was very young. Some people didn’t like his ideas and felt he was a traitor to his class. He and Eleanor were very privileged people and did not have to do the things that they did. Eleanor was a feminist and more connected to those less fortunate in the community. She took FDR to a settlement house in New York City and to factories were children were working hard but could not read or write. Nina said the two bonded over more important things than outward appearance and economic status and she began to share wonderful stories with the group.

When FDR developed polio in 1921, his mother wanted him to retire and had to convince Eleanor to be the front for him. Franklin always thought he’d walk again and he did not try to hide his disability. During those years, people with disabilities were shunned. FDR wanted to make these individuals at Warm Springs (GA) feel accepted and comfortable.

Nina said her grandmother was charged with keeping FDR’s name in front of people. She had to learn to drive although there were those who thought she never really did do so. She had to learn to speak in public and really wanted to help people. Eleanor and Franklin also spent a lot of time with people of color. Meanwhile things begin to come together for Franklin. He faced his challenges and got to know others with challenges.

Both Franklin and Eleanor truly cared about people. They wanted all economic levels to realize their dreams and have a place in this country where they could be heard. When Franklin died, the tears of the people who lined the train route from GA to DC were the emotions of those who felt they had lost a friend.

In response to a question, Nina said they had said we all put our pants on one leg at a time so always listen to others and respect what they are saying because it is coming from their heart. In response to a question about her grandmother’s assessment of today’s society she said I think given my grandmother’s value system, she would be sad that we could not talk with one another

Nina Roosevelt Gibson has not written about her grandparents but she has compiled and translated for her family all of the letters Eleanor sent to her. Eleanor wrote constantly as her way to communicate but her writing was difficult to read.

Here is a slideshow of all of the photos from today’s meeting: