Meeting opened by President Elect Paul Bennett in the absence of President Bob Grady followed by the Pledge and Invocation.

Irv Mindes was Sergeant at Arms and lead with a tribute to PDG Dick Palmer (DG 1988-1989) for his many years of service to Rotary. Dick is the last member of the veterans of WWII from Catalina Rotary and his passing marks the end of an era for CRC. Many tributes from members then ensued, culminating with a heartfelt remembrance from his daughter, Nancy Romero. Donations in Dick’s remembrance can be made to the Catalina Rotary Foundation. The date of memorial service will be announced when it is available.

District Governor (DG) Ellie Patterson was introduced by Assistant Governor Anita McDonald. Ellie then, in turn, awarded the certificate of completion for the 2018-2019 Rotary Leadership Academy to Anita McDonald.

We are the first visit on DG Ellie’s cruise to all of the clubs.

DG Ellie offers consistent and constant support to her clubs and district. She asked our PDGs Ron Goodsite and Frank Presson for ongoing advice and counsel during the year. She congratulated the club for its Big Project in helping to create the Creative Arts Center for the Boys & Girls Clubs of Tucson.
DG Ellie encouraged us to ask friends, neighbors, colleagues to join Rotary. Her comment was “Rotary Changes Lives” as she spoke on the global reach of Rotary. We are all part of one team.

Jo Anne Westerman asked if we might see the district sponsor branding across Tucson, such as Billboards and publicizing a common project among all the Tucson clubs.

DG Ellie gave her ten goals for her year as DG:

1. Visiting all Clubs: and wishing to see an increase in multi-club projects. Making connections between clubs and working on projects together.
2. Grow membership from 1435 in the district to 1500. There is an August 3 District Membership Conference in Green Valley that she was promoting. She also encouraged consideration of forming a Satellite Club or starting a Passport Club.
3. Publicizing and promoting the District Conference Cruise in October. She is “looking forward to a boat load of Rotarians”! She thanked Al Anzaldua and Barbara Kiernan for their work on the Program Committee and talked about the joint project with District 4100 in Ensenada, Mexico.
4. District wide event, yet to be determined, such as having a Rotarians at Work Day such as cleaning parks, hosting a Food Bank Event, or planting trees.
5. Public Image Activity. Encouraging better use of Face Book and Webpages.
6. Promoting the Ride to End Polio. El Tour de Tucson (Nov.23). We are now the largest single polio-focused project in Rotary raising over $53 million to date (including the Bill & Melinda Gates match). And noting that this year District 5500 is a co-sponsor of the event.
7. Promoting the Foundation Meeting on November 9.
8. Promoting District Grants and Global Grants and our partnership with Rotary worldwide.
9. Innovative Ideas: DG Ellie wants us to embrace change in our clubs:
a. What would you stop in your club?
b. What would you start in your club?
c. What would you change in your club?
10. Looking forward to how Rotarians break things this year:
a. Breaking the cycle of Poverty.
b. Breaking Ground for water wells.
c. Breaking the seal of polio vaccine vials.
d. Breaking open bottles of beer at the Rodeo and Senior Open.

President Elect Paul Bennett wrapped up with closing comments. He presented DG Ellie with a check from the Club for her upcoming ride in the El Tour de Tucson “Ride to End Polio” and thanked those who helped with today’s meeting.

And then he rang the bell and ended the meeting.

Check out the meeting photos. Click on any photo to open the gallery and read the captions. 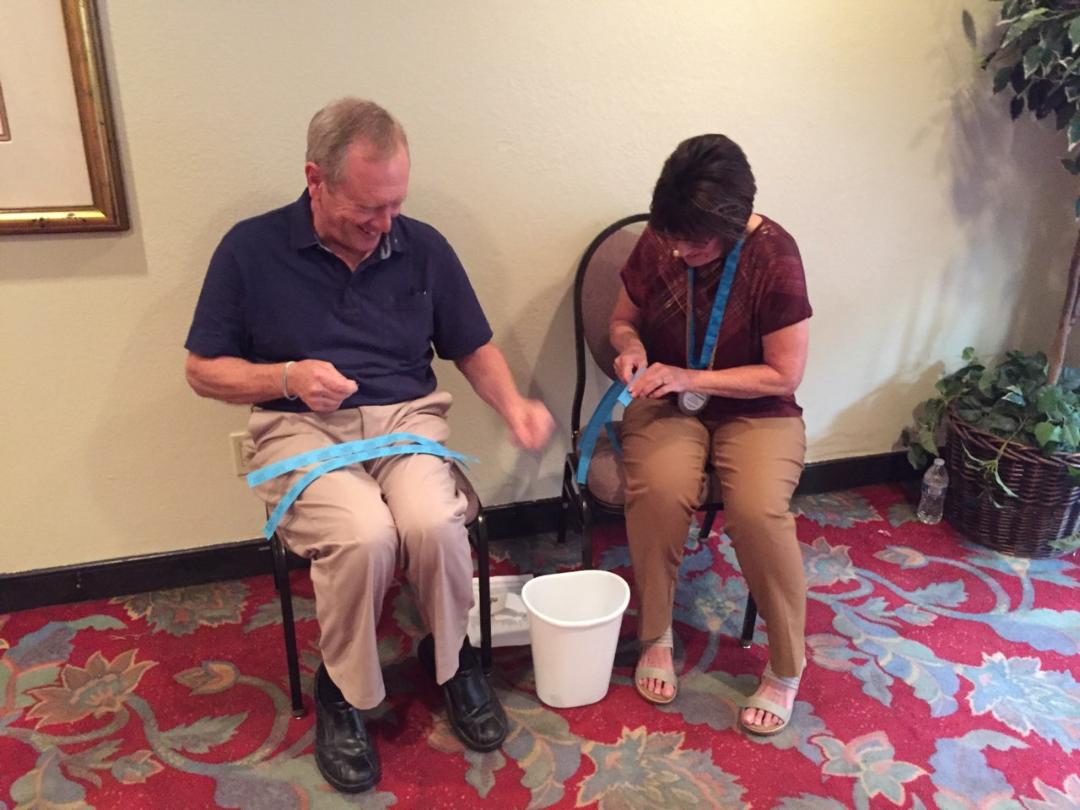 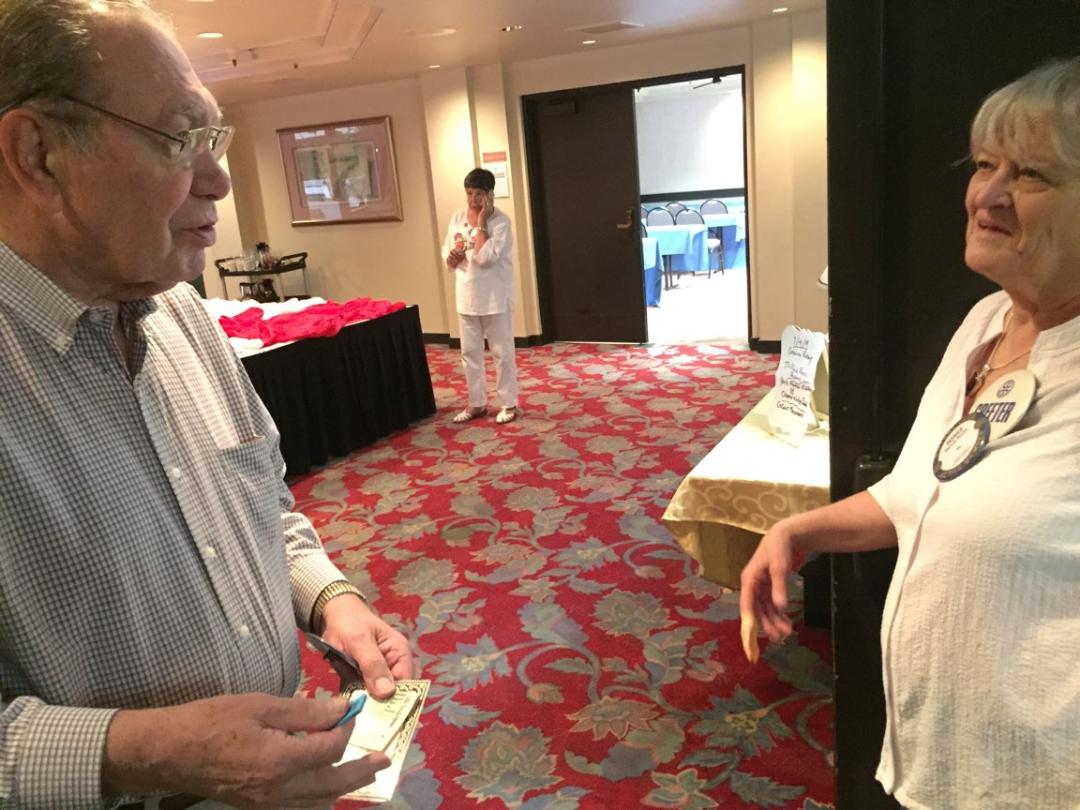 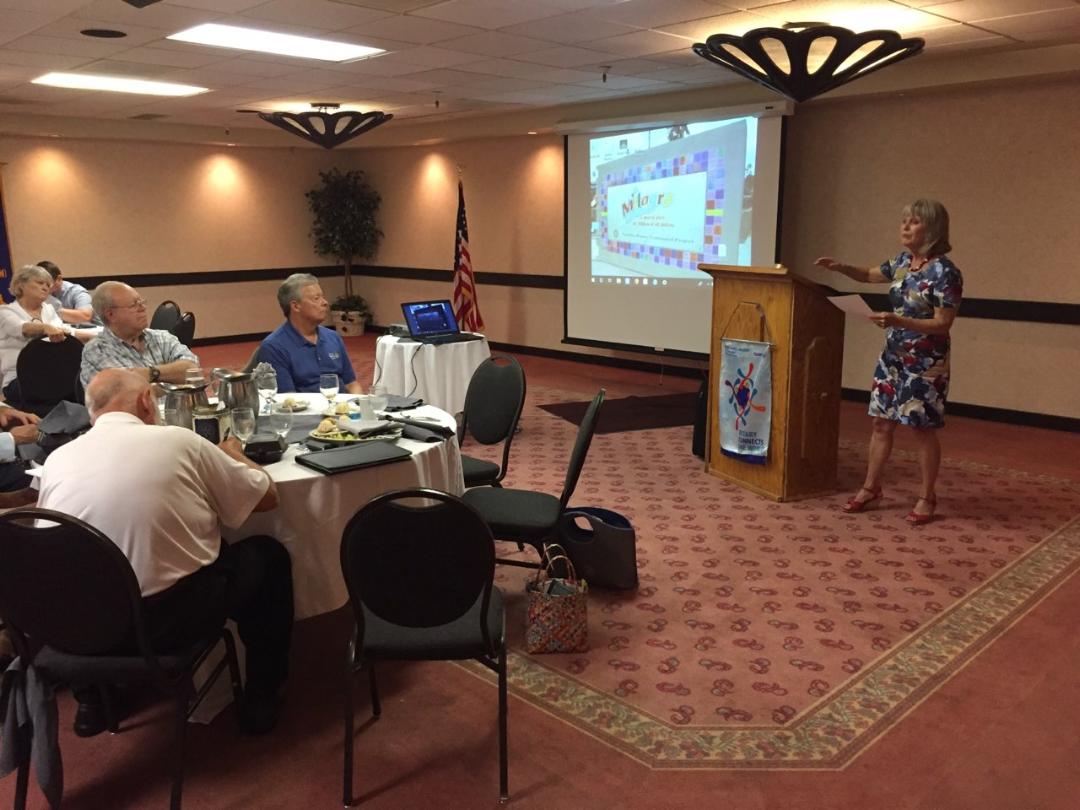