President Bob Grady opened the meeting with a big thank you to all who participated in the fund raising efforts at the Tucson Rodeo and the Cologuard Classic Golf Tournament over the past three weeks. With an assist from Mother Nature who provided good weather, preliminary estimates are that we raised over $38,000. After our pledge of allegiance to the flag, Jim Kestler gave his usual fine invocation calling for peace and healing in our world, thanksgiving for our fund raising, wisdom in its prudent use and a welcome to today’s speaker from the Catalina Council of the Boys Scouts, Jeff Hotchkiss.

As we finished our meals, President Bob made a series of announcements:

Detailed the most productive booths at the Rodeo and the top tip getters.

Announced Friday the 13th thank you event at Hi Corbett Field where we have a private suite prior to the game.

Joe Danieszewski from the Tucson Rotary Club announced that on April 4th, the Rotary Day of Peace will take place at Truly Nolan’s corporate offices with Rabbi Stephanie Aaron, Mayor Regina Romero and other dignitaries participating. There will be workshops run by the Committee for Community Dialogue teaching about conflict management and listening skills. Kirk Reed began the program last year when he was District Governor and we are encouraged to attend. It runs from 9:30 AM to 3:00 PM.

On April 25th, we will do our spring road cleanup, meeting at the 7-11 at the NWC of Skyline and Swan.

Today’s wearer of the Q of H apron was Michael Troughton. The ticket of Andy Kerr was selected and he picked the three of hearts…too bad. The pot has grown to $1810.

Irv Mindes was today’s sergeant and in sergeant-ly fashion he had some history quizzes for us relating to March 6th. We learned that the Dred Scott case was decided on this day in US history (https://www.history.com/topics/black-history/dred-scott-case), Eugene Debs announced his candidacy for president (https://en.wikipedia.org/wiki/Eugene_V._Debs), and Silly Putty was introduced to the world on this date in 1943 in New Haven, CT (not worthy of a link). This was followed on by a plethora of happy bucks highlighted by fun travel outings for Michael Troughton and Tom Robertson.

Maria Anzaldua sold raffle tickets for a beautiful painting of a dog that she did and raised $100 for a school in Ensenada, Mexico (which we learned about at last District Conference).

Matt Matthewson introduced today’s speaker, Jeff Hotchkiss, the president of the Catalina Council of the Boy Scouts (which encompasses Pima, Cochise and Santa Cruz counties). Jeff is a member of the Tucson Rotary Club, had been in Kiwanis for 19 years, and has been in Scouting for 33 years, most recently in Worcester, Massachusetts. He has been in Tucson for ten months.

Jeff first addressed the difficult issue of safety in scouting. He explained that all adults working in scouting must have a background check and that there must always be two adults with the boys. He stated that one out of every six men in the US has been abused at some point in their life, so the problem is very real. They are committed to safety for the boys.

The Boy Scouts are organized with a national entity and what amount to local “franchises” such at the Catalina Council. The national entity is what has filed for bankruptcy reorganization. This is to make sure there is money available for victims and to assure that the organization can continue.

The Boy Scouts were the brainchild of a British general in the Boer War who was dissatisfied with the physical, mental and spiritual condition of the British soldiers he commanded. At the age of 50, Robert Baden-Powell created the Boy Scout Association in 1908 which led to the Boys Scouts of America in 1910. One important aspect of Scouting is the patrol structure where small groups of boys (5-10) are led by a slightly older boy in their activities. Jeff distributed copies of the Boy Scout Handbook from 1965 to today to show how they have kept up with the times but maintained the same principles.

Jeff emphasized the importance of children being in nature and described a condition call Nature Deficit Disorder in kids who don’t get a chance to experience the outdoors as perhaps we had an opportunity to 50 years ago. He addressed girls in Boy Scouts and said the outdoor and activity focus was a differentiator from the Girl Scouts.

Bob Grady closed the meeting by telling Jeff that we would be inoculating ten children against polio in honor of his visit. As usual, Bob thanked the meeting volunteers and ended with a quote from General Powell: We must change boys from a ‘what can I get’ to a ‘what can I give’ attitude. 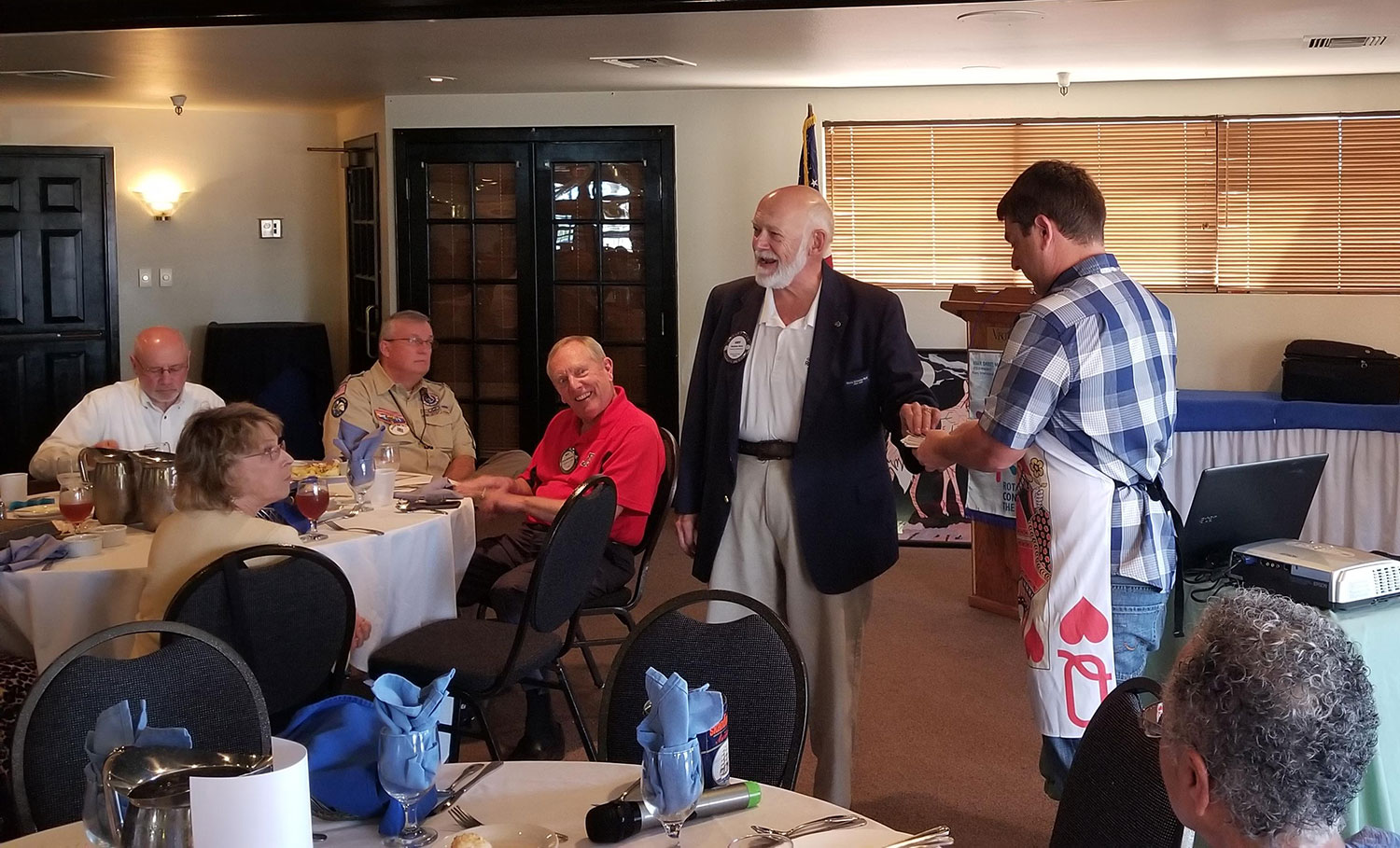 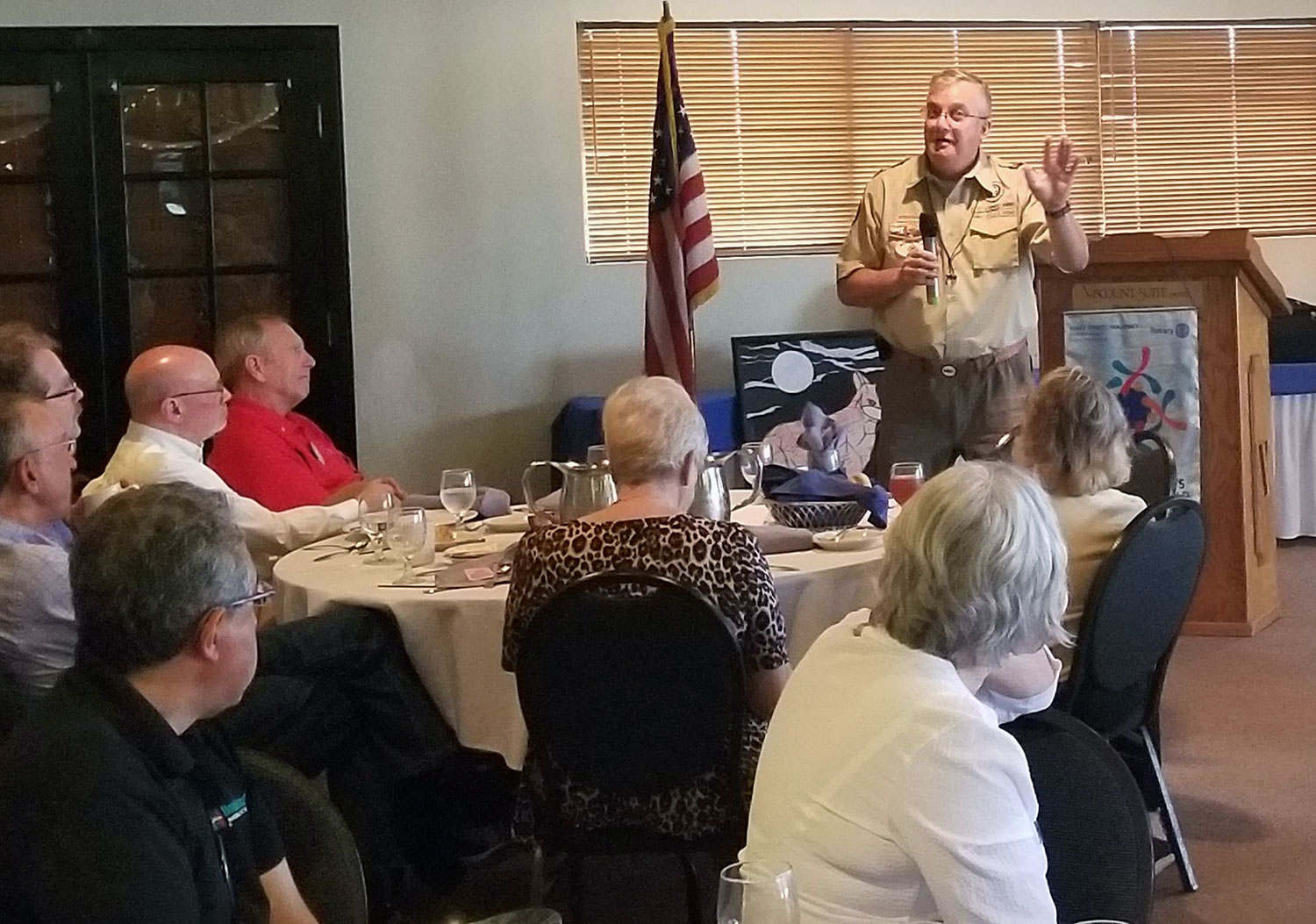