President Bob Grady welcomed everyone and expressed a special thanks to the 11 members and 2 spouses who helped at the tear-down/clean out event on June 15th at the Boys and Girls Club. M Craig gave the invocation.

The celebration to kick off Bob Grady’s second term as president is June 28, 6:00 PM to 8:00 PM at Tom and Cindy Robertson’s home.

No meeting on July 5th due to the holiday. However, this meeting will be replaced by a regular meeting on the 4th Friday this month.

Due to health reasons, Ed McEuen will miss the next few meetings. Dick Stein is reportedly doing well as he recuperates at an assisted living facility on a temporary basis. Members expressed good wishes for both gentlemen.

Pat Egbert gave an update on the Big Idea Raffle and with a pie graphic gave all a chance to have an opportunity for a piece of the big prize by buying a share of a ticket for $25.

Jim Kester, sponsored by Norm Rebenstorf, was welcomed as a new member as President Bob presented him with his member badge, Rotary pin, and plaques. Jim was joined at the podium by his wife, Lisa Ann, and shared that they would be celebrating 40 years of marriage on July 7. Jim’s Classification is Ministry; he is Senior Pastor at Sahuaro Baptist Church on Old Spanish Trail.

Recently inducted new member, Denny Bastron, became a Paul Harris Fellow and was presented his PHF Certificate and Pin. President-Elect Paul Bennett was presented his new Paul Harris Fellow +2 pin. President Bob expressed appreciation to both for their commitment to the Rotary Foundation which provides a portion of the funds received three years prior back to clubs to fund club community service projects.

And then there were 4! Today, $213 worth of tickets were sold, for a total pot of $4461. M Craig had a one in five chance to take home the winnings, bit it didn’t happen. Four cards remain!

SAA Irv Mindes presented a gift to the CRC Foundation in honor of his anniversary and Andy Kerr made a gift in honor of a recent trip visiting family and friends. Irv noted that the Chessers were married twice according to the club newsletter; June 26 according to Al and June 29 per Sharyn. While Tony Spear threw himself in front of the bus and said it was probably his mistake in entering data, Irv thinks the SAA at our next meeting should see what Al and Sharyn have to say – should be funny for sure.

President Bob introduced today’s speaker, our very own Catalina Club member and District 5500 Governor, Kirk Reed. While most of us know Kirk, Prez Bob shared a few interesting facts about him. Kirk is a third generation Rotarian and was recruited 28 years ago by his dentist. His family has been in Rotary for 97 years. He has held membership in four clubs (Illinois and Arizona). His favorite responsibility was serving as Program Chair in our club and his least favorite was as AG in Illinois. DG Kirk started a book club in Tucson 6 years ago and never thought he’d ever be District Governor. However, he admits that 99% of his year as District Governor was delightful.

Kirk discussed the Top 10 things he learned as District Governor and shared many wonderful stories. Some of the highlights included during his club visitations having members share what made them proud of their Club. Time after time responses illustrated that we care about each other, our communities and doing good in the World. He observed that relationships in Rotary fostered club vitality and creativity. On the other hand, Rotary is still a secret in most cities and towns and increasing Brand awareness is an important priority; sharing that we are “People of Action.” This year, DG Kirk’s response to “What is Rotary?” was we are people who Dream Big, Have Fun and Get Things Done. He indicated that the Clubs had accomplished a great deal this year. He offered the suggestion that we give a different member each week a minute to share what they are passionate about within or outside of Rotary. It will help to build/strengthen relationships. He also announced a new initiative to develop a program for training Peace Conversation Facilitators. Kirk is a constant learner and ended with no surprise by saying “I learned a lot.”

President Bob and M Craig presented Kirk with one of M’s personally painted tile masterpieces. M stated, “We love you and appreciate all you’ve done for our Club and for Rotary.”

Click on any photo to open the gallery and read the captions. 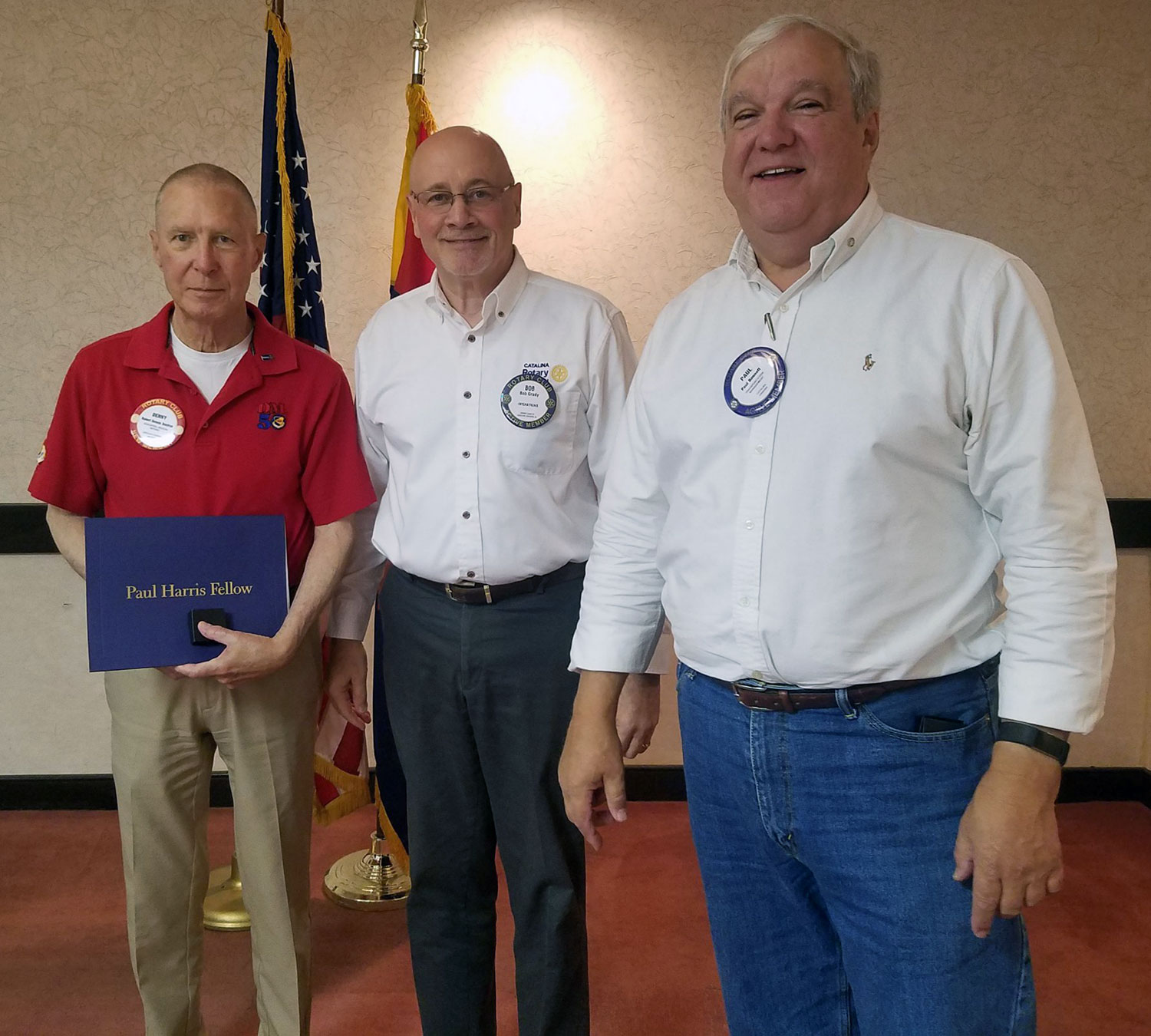 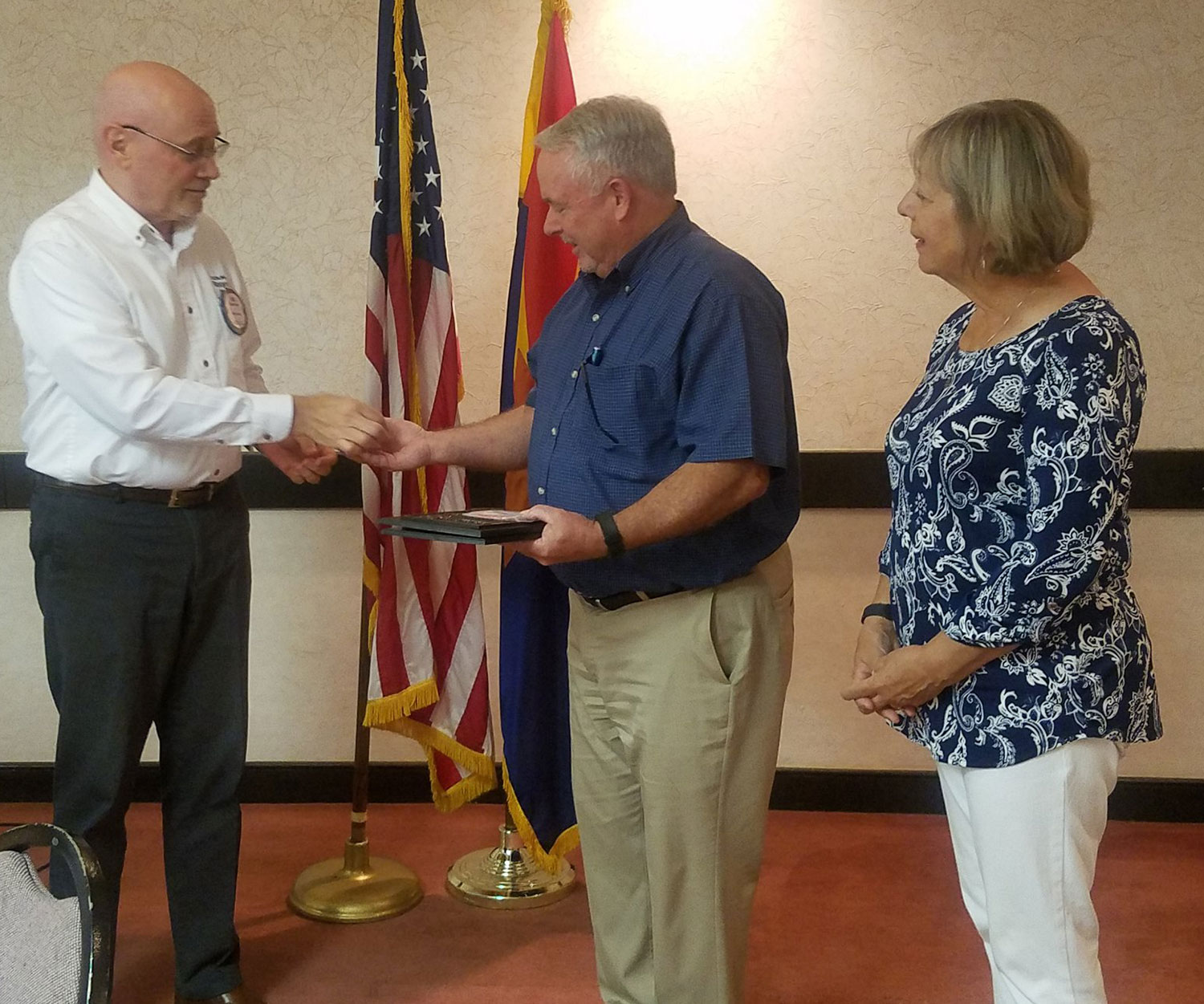 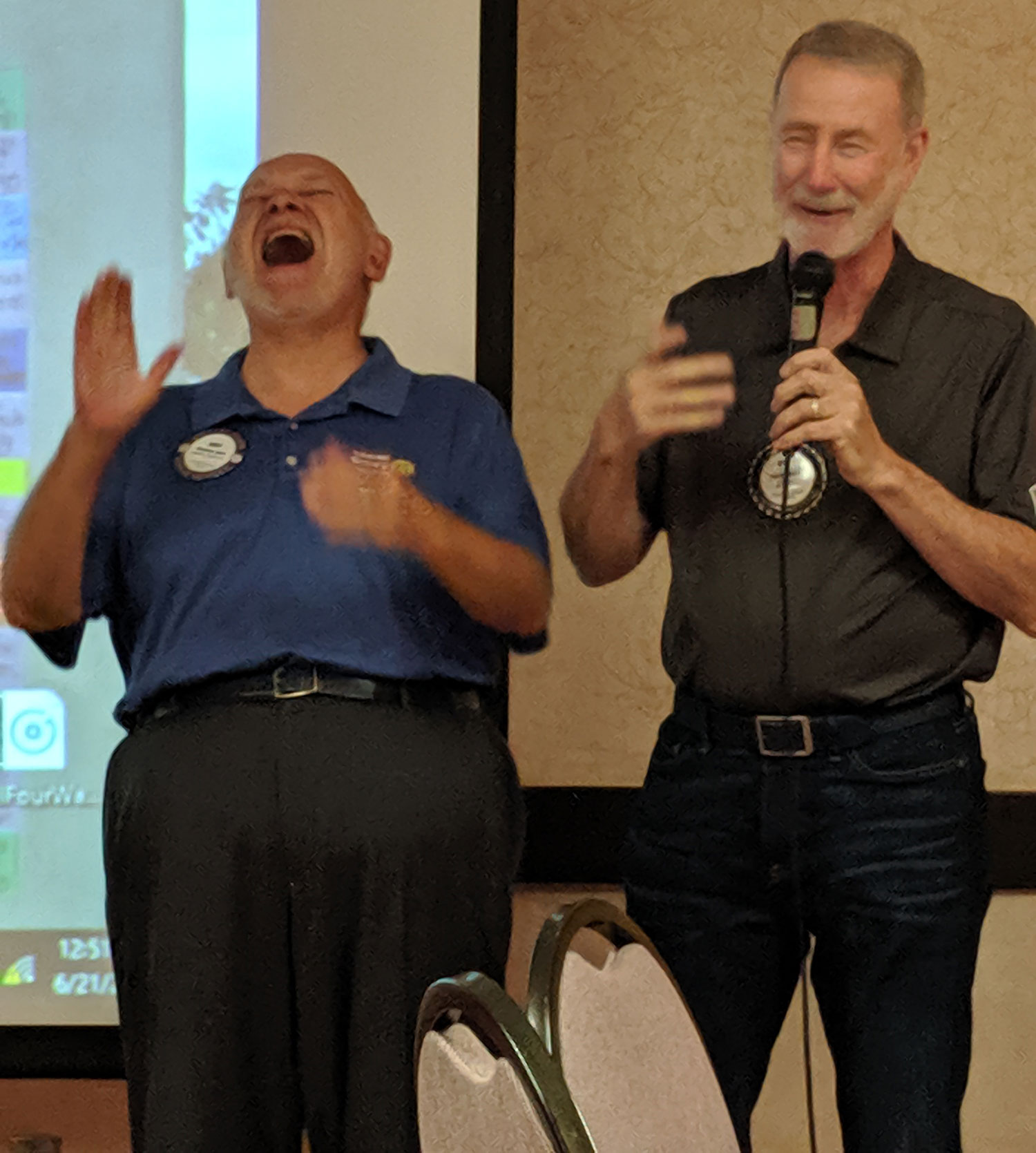 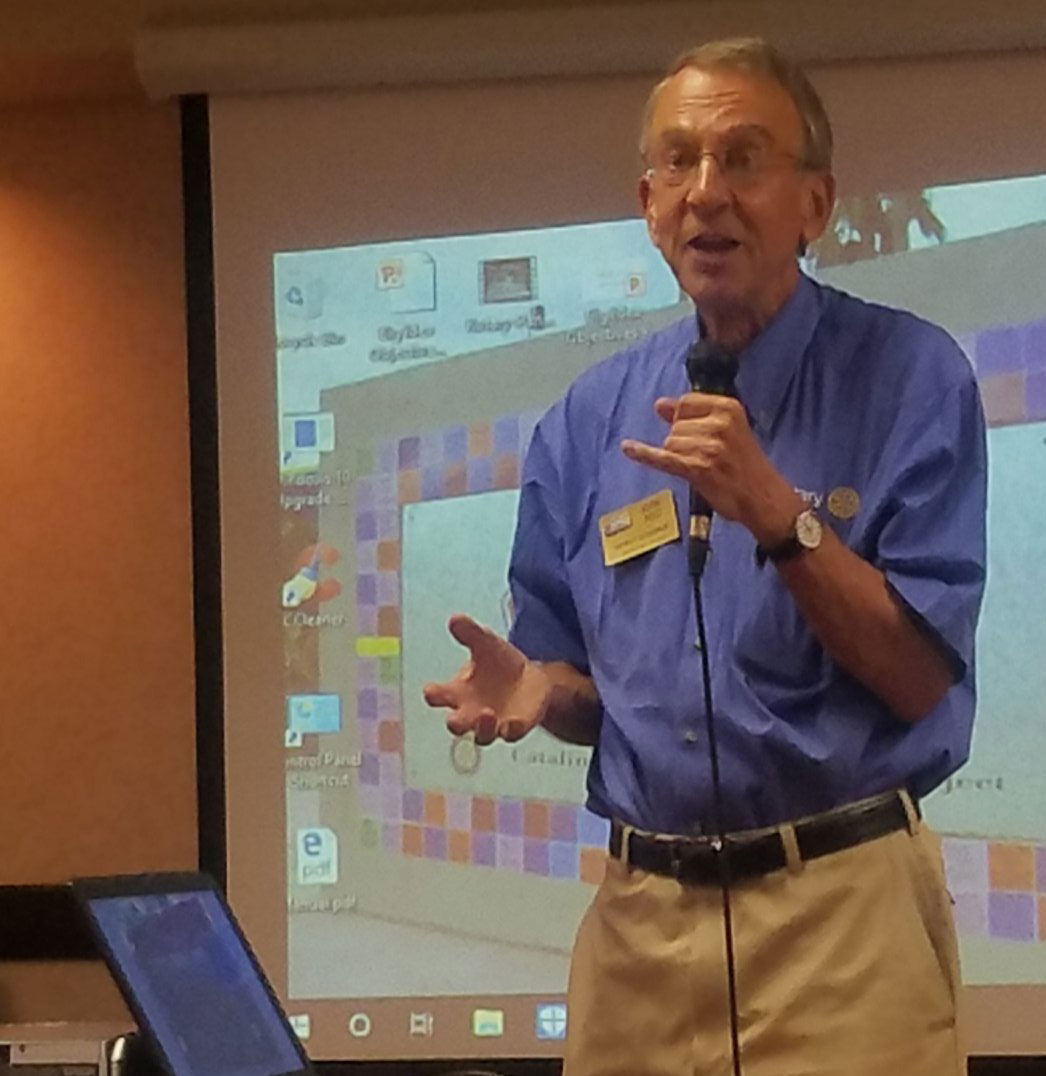 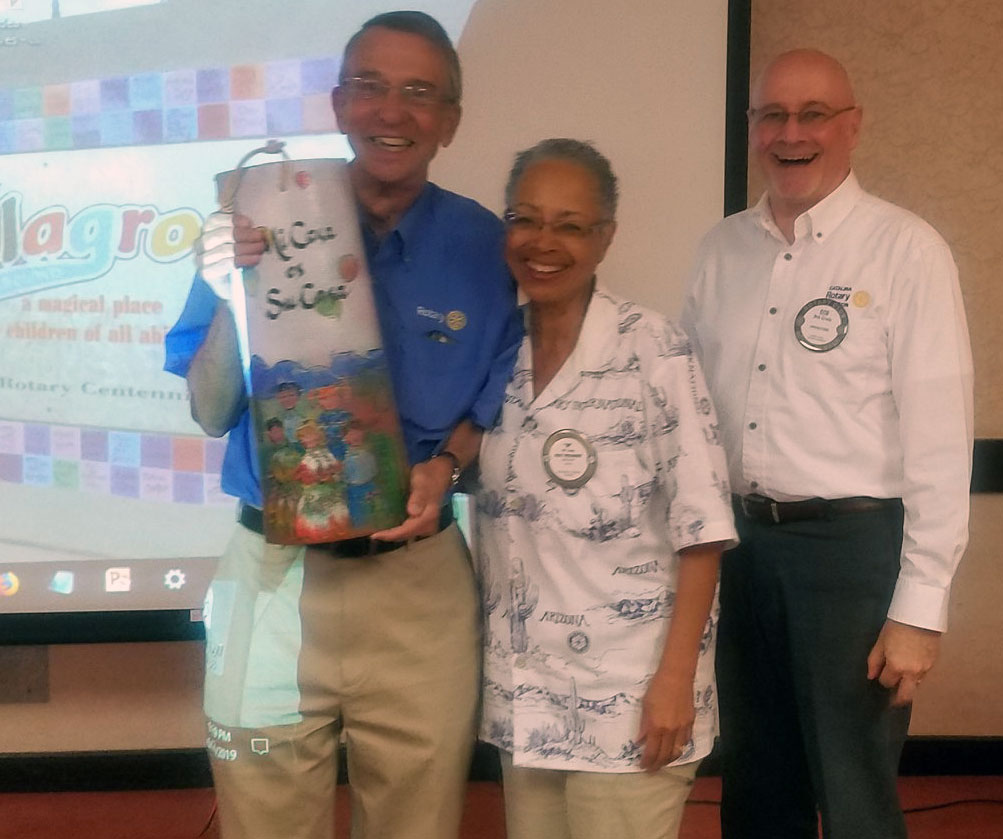