President Bob welcomed everyone to the club “focused on making an impact in the lives of children in need.” He then led the Pledge of Allegiance followed by the Invocation given by Jimmy Munozcano.

A Club ‘Happy Hour’ is scheduled for 6:00pm, April 25th at the Sentinel Peak Brewing Company on Grant Rd and Swan.

Rotary Spring Training, the District training event for club officers and members wanting to learn more about Rotary, will take place May 4, 8:30am – Noon, at Quail Creek in Green Valley. The cost is $10 or $12 depending on how many members attend.

Ernie Montagne invited us to join the Tucson Sunrise Club for an evening of fun, fellowship and fundraising; “Going Bowling” at the Golden Pins Lanes on Miracle Mile to support disaster relief in East Africa. The funds will be used to provide Shelter Boxes.

Paul Bennett said sales for the day were $175 making the total pot of funds $3715 with only 13 cards remaining. Andy Kerr had the opportunity to take home $1857.50, but pulled the 3 of spades. Maybe next week will see a winner. Only 12 cards remain.

Irv Mindes served as SAA today with Michael Troughton as his can man. Irv shared that he had taken his four grandchildren on a Disney Cruise and was putting $250 in the can. After a little friendly challenge that he should do $250 per child, Irv accepted the challenge at $1000 for The Rotary Foundation if ten others would give $100 each to match his $1000. Within seconds he had commitments from Dick Carlson, Pete Walsh, Andy Kerr, Steve Pender, Tony Spear, Bob Stofft, Barbara Kiernan, Peter Pritz, and Al Chesser.

Steve Pender put money in the can on behalf of Phil Four-Way who gave a wrong answer last week in the Godfather movie quiz. Bob Stofft honored his three lovely granddaughters. Al Anzaldua had the privilege of going to Vienna to speak at a conference and saw the Viennese Giant Ferris Wheel. Al Chesser gave a leg up to express his appreciation to members for their support over the loss of his mother.

President Bob Grady had the privilege of installing two new members: Maria Anzaldua, sponsored by her husband Al, and Robert “Denny” Bastron, sponsored by Frank Presson. We will get to know more about Maria and Denny in the weeks ahead.

Matt Mathewson stated that it is always special when a program is presented by one of our own. We’ve heard from Al Anzaldua and Dick Carlson and today we have M Craig. M grew up in an Air Force family with Japanese and American roots. She graduated from Mills College in California with a bachelor’s degree in Fine Arts. M has lived in Tucson for 40 years with her husband Steve and their two beautiful and successful daughters, Stephanie and Michelle. She has been a Catalina Rotarian for almost 30 years and was the first female officer in the club; serving as secretary for 6 years followed by one year as president. Her community involvement includes the Women’s Council of Realtors, the Japanese-American Society of Tucson, Sweet Adeline’s International and the Tucson Origami Club, which she founded. M has taught the ancient art of paper folding since 1996.

M stated that her topic today was Building Bridges with Origami because she has been doing it all of her life, having grown up in a family that was American and Japanese. Her first experience with origami occurred when she was 10 years old. In Japan, her aunt taught her the paper crane, the first origami model which has become the international symbol of peace and goodwill.

M shared slides Illustrating the activities of the Tucson Origami Club. This Club has been meeting for 14 years at the Vietnamese restaurant, Dao Tai Pan’s on Wilmot across from St. Joseph’s Hospital. It meets the first Saturday of the month from 10:00 am to 11:30 am. The club creates projects based upon themes sometimes related to a particular month such as Easter, Mother’s Day, or Christmas. They have had their works displayed at the Chinese Cultural Festival, the Tucson Japanese Gardens and other area festivals. M shared fun stories about the diverse audiences she has had the opportunity to work with, all part of Building Bridges.

M then took on the challenge of having all of those in attendance make their own “hopping” frog. What fun!! Catalina Rotarians were seen in the hotel lobby after the meeting, showing the hotel staff their “hopping” frogs and engaging in great laughter.

Click on a photo to open the gallery and see the captions. 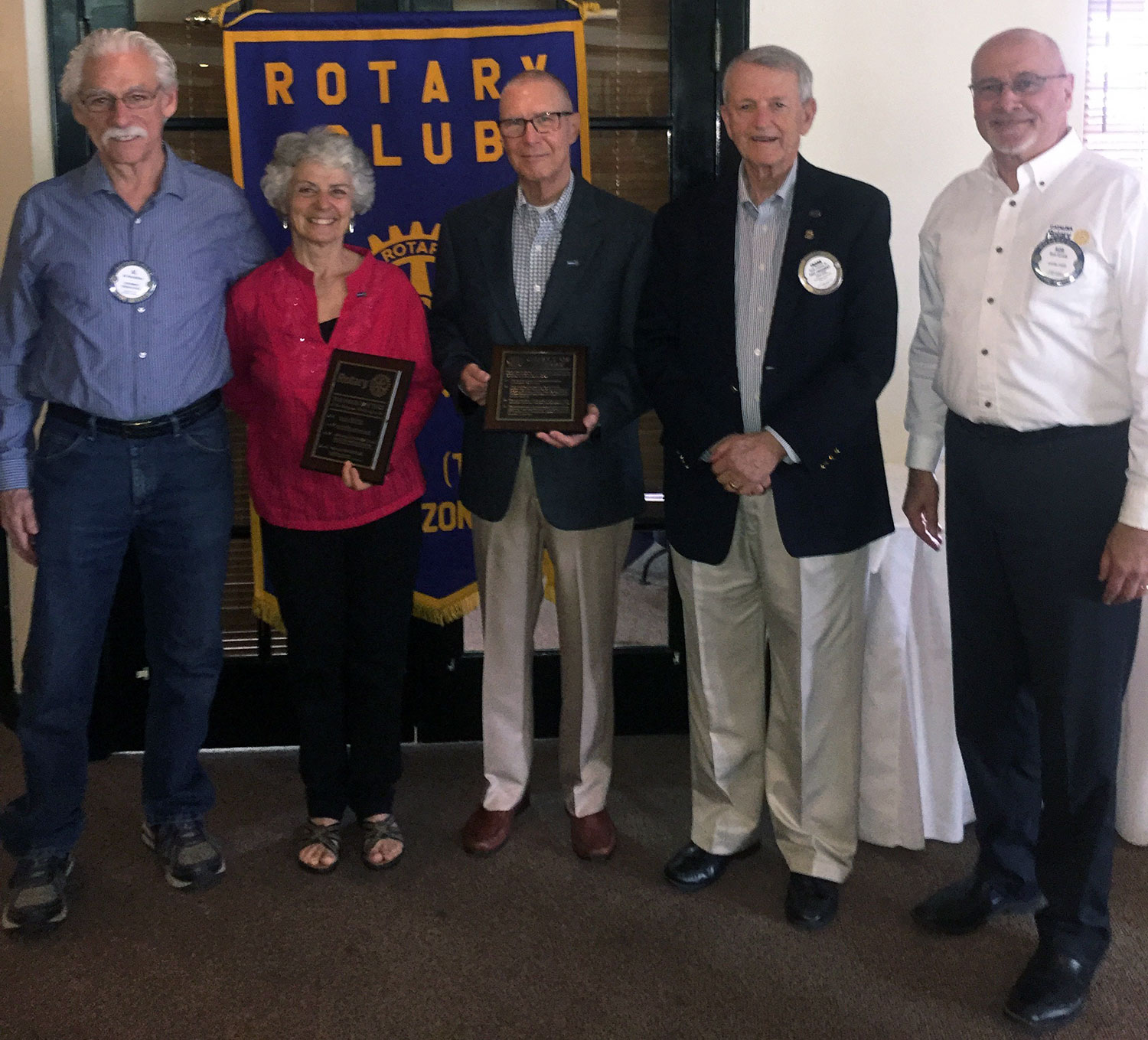 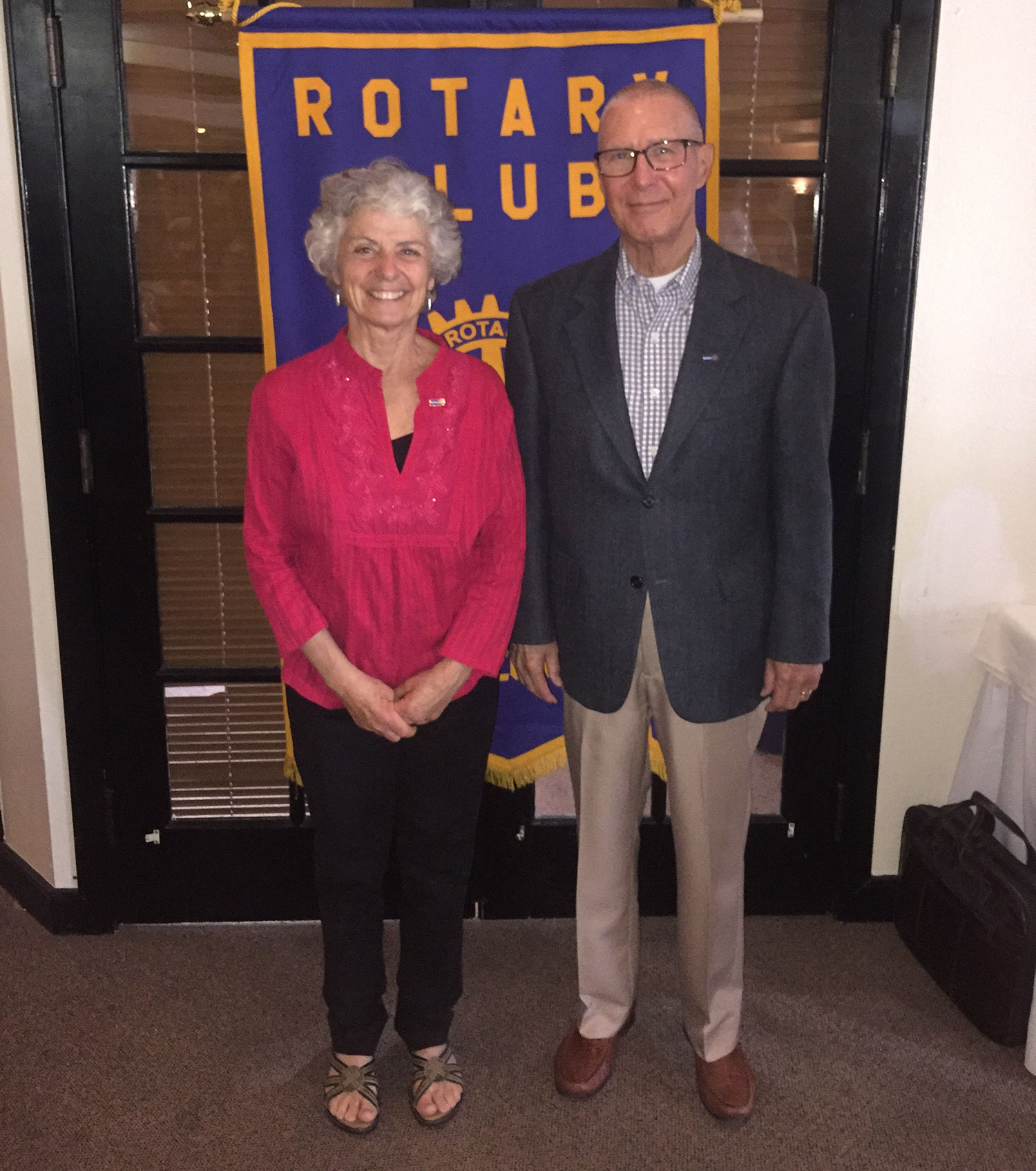 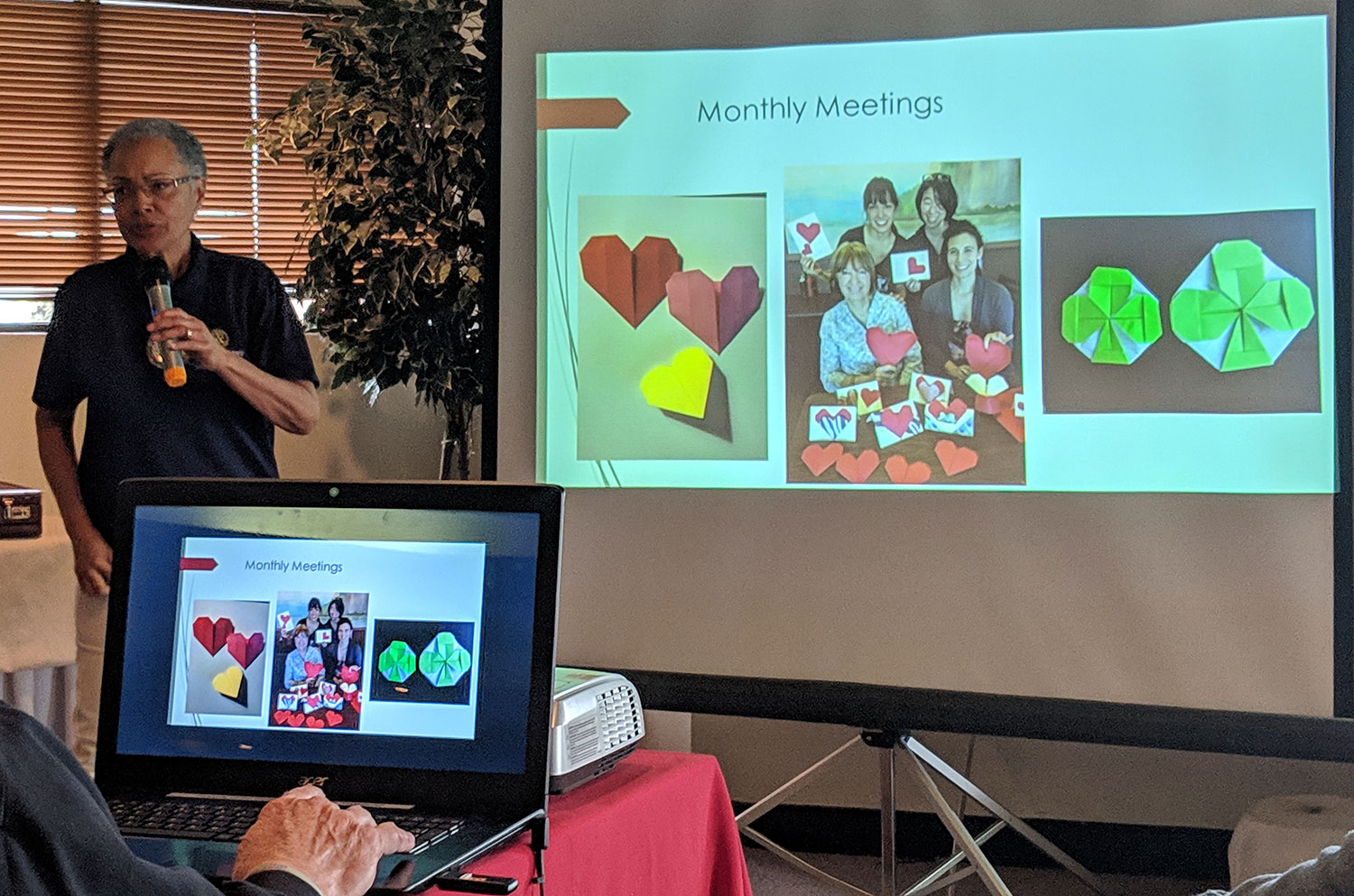 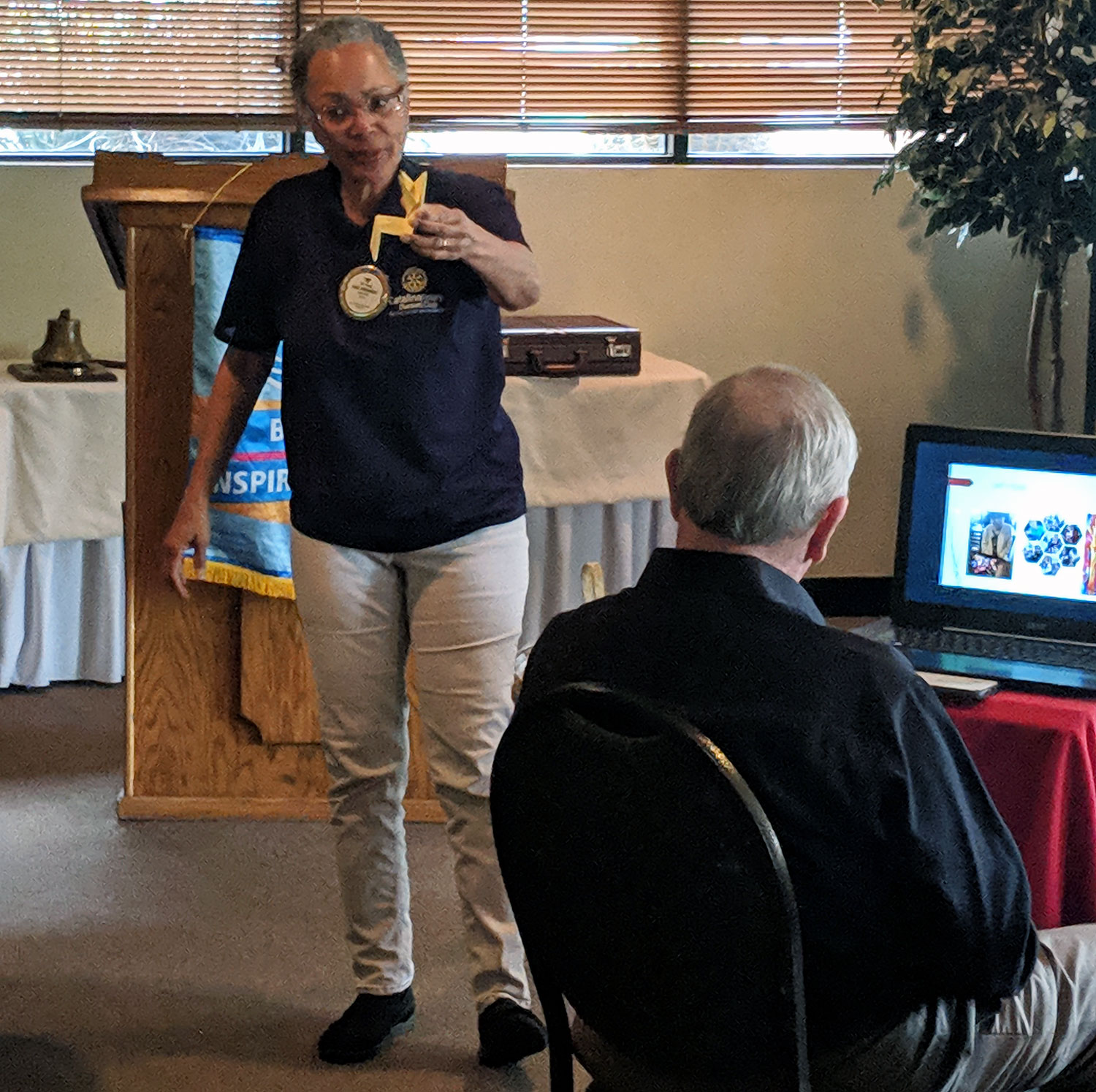 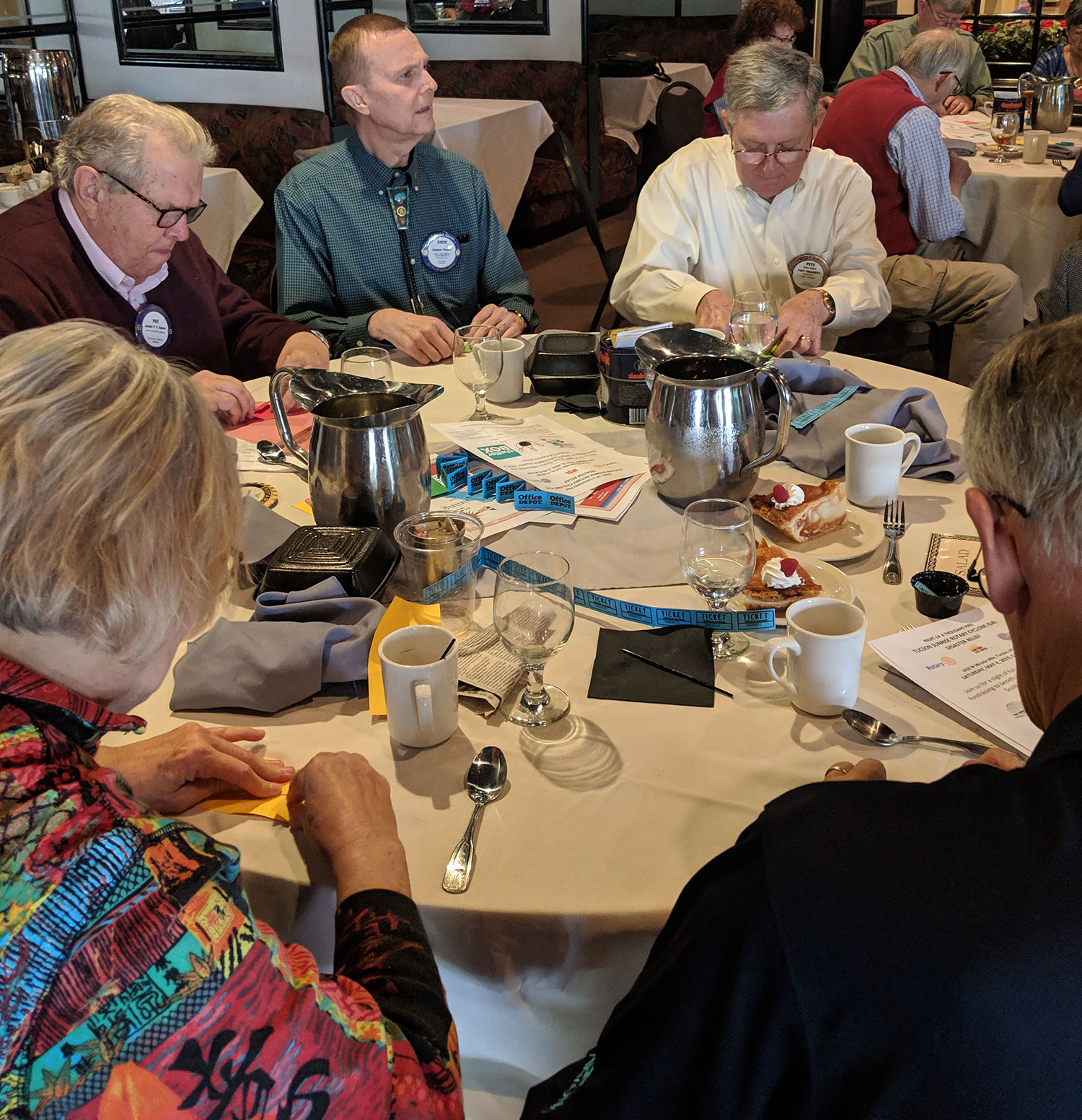 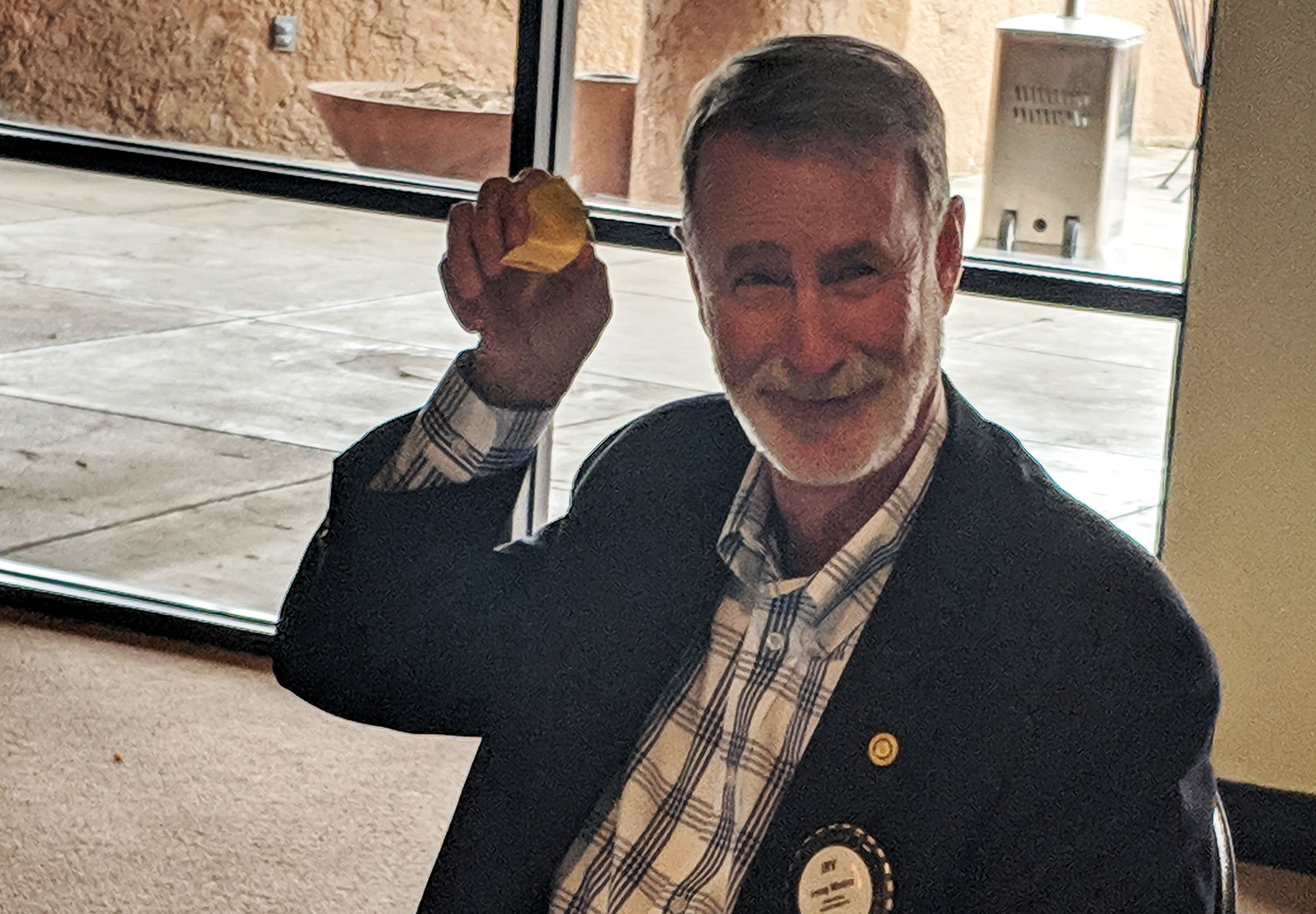