President Bob Grady opened the meeting as Rotarians hurried in after braving torrential rain and flooding. It was worth it!

Norm Rebenstorf offered the invocation, remembering the character and contributions of the recently deceased President George H. W. Bush and Deputy U.S. Marshal Chase White who was recently killed in the line of duty.

María Anzaldua was with us today, guest of Al Anzaldua. Welcome María!

No Announcements today, but two presentations from the podium as members continued their lunch.

1. Barbara Kiernan, World Community Service Chair, introduced members to the Guarijío people, beneficiaries of our recently approved Global Grant to improve rural healthcare in Sonora, Mexico. The grant will begin in January of 2019 and end in December of 2021. Slides featured pictures of the people coming together on Nov. 2 to celebrate the grant – fording rivers, walking miles, or bumping over dirt roads in the back of pickups. Barbara also invited members to join in the grant’s inaugural events to be held in Alamos the first weekend of February. A caravan of cars will be leaving from Tucson on Thursday, Jan 31. Contact Barbarakiernan@cox.net for more information. A summary of the grant and the Alamos trip is on CRC website.

2. Jeff Derickson, Tucson Native and longtime member of Catalina Rotary (joined in 1981), gave a Member Minute (or three!). He had lots to say. Jeff was President of the club in l989-90, initiating his year at the International Rotary Conference in Seoul, Korea. He has also been World Community Service Chair and organized a very successful Friendship Exchange and Service Project trip to Ajijic, Mexico in 2009, taking “millions” of amazing photos in the process. Jeff was an Eagle Scout as a youth, became a dentist at USC, and married his college sweetheart, Cece. They still attend UA Basketball games together and each plays a mean game of pickleball. Jeff knows well the topic of this week’s speaker, polio, as a member of his family experienced the very illness that Rotary has vowed to conquer. To end, Jeff passed around some of his artfully created hunting knives, some of which have graced Catalina Rotary silent auction tables in the past. Thanks Jeff for sharing your Member Minute and catching us up on details we may not have known!

Norm Rebenstorf started the drumroll, with more than $1,000 on the line for the winner of this 50-50 raffle. Werner Kruesi drew a heart, but only the 8. Whew! Thanks Werner for rolling the pot over once again. Next week should be a dynamite time to buy a ticket. The odds will never be better this year!

SAA Irv Mindes shared a moving testimony about Catalina Rotary’s Veteran’s Project, with members of the “Greatest Generation” among them. They put themselves into harm’s way because they saw it as their duty – not for fame or for war stories to be told later. Many never really spoke of their missions and their experiences. They came home, raised families, and contributed to building the country for the next generation. On the 77th anniversary of Pearl Harbor, we must still remember the character and contributions of those who serve.

DG Kirk Reed introduced our speaker, Jim Lamb, D5500 Polio Chair for the current year. With two doctorates in areas such as micro-biology, and personal experience with polio as a 10-year-old, Jim was the perfect person to bring us the science behind polio. With visuals of cells and the nervous system, he was able to give us all access to what actually happens in our bodies when we contract polio – and even when we are exposed, but do not develop the disease. You could hear a pin drop! Jim also spoke about Post-Polio Syndrome, a sequella of polio that he is experiencing himself. Although the science of this syndrome is not completely clear, the symptoms are. Jim outlined the 10 most common ways people are affected: fatigue, weakness, loss of muscle mass, anxiety, depression, respiratory difficulty, swallowing difficulties, depression, muscle spasms, difficulty walking, difficulty sleeping, pain (unexplained), and brain fog. Jim could have continued for hours with a rapt audience, but time expired. Not surprisingly, Jim was delighted to know that 10 children will be inoculated against polio in honor of his presentation. Thanks Jim for an excellent presentation!

As we closed, President Bob reminded us that next week is our holiday party. Be sure to be there!

Check out this photos from the meeting. If you’d like to view the caption, click on the photo to open the gallery. 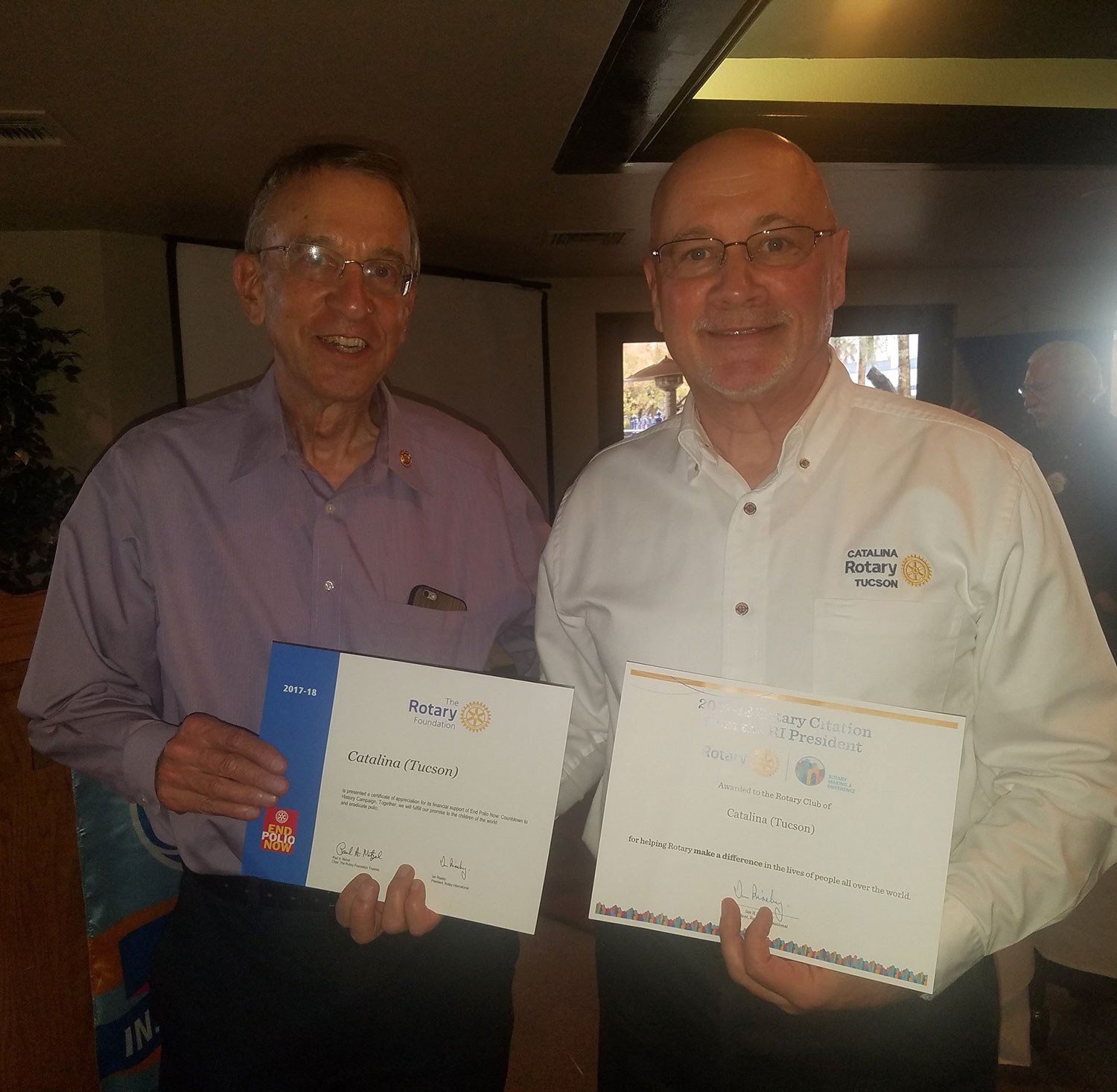