President Bob welcomed a large turnout to the meeting and led us in the Pledge of Allegiance once the flag was located.

M. Craig sang a splendid rendition of “Dona Nobis Pacem” as the invocation.

Lunch consisted of Rigatoni Pillows in olive oil and fresh parmesan cheese, grilled asparagus, risotto rice and for dessert, tiramisu. Salads were available for the meek.

Bob Grady had a bevy of announcements including the following:
1. Lost and found: a baseball cap and an umbrella were returned to their rightful owners.
2. The last week of the month social activity took place last Thursday evening at Fini’s Landing and was a success with 21 participants.
3. President Bob updated us on the three finalists for the Big Idea which are the Boys and Girls Club Creative Arts program, Integrative Touch for Kids (ITK) and Youth on their Own (YOTO). Tom Robertson, Sharyn Chesser and Tony Spear/Jeff Hamstra will head up study teams for each of these organizations, respectively. There is a meeting on Thursday, November 8th with YOTO and anyone wishing to get involved can contact Tony or Jeff.
4. We need 8 volunteers for the Aid Station for the Ride to End Polio (El Tour de Tucson) from 3-5 PM on Saturday, November 17th for tear down/clean up.
5. Presidio Club has a fundraiser tomorrow (November 3rd) called Passport Tucson (a food sampling in downtown Tucson) and is looking for help with execution.
6. We will be serving Thanksgiving Dinner to families at two Boys and Girls Clubs in Tucson: On Wednesday November 14th at the Roy Drachman Clubhouse at 5901 S. Santa Clara Avenue near intersection of 12th Street and Drexel from 3:30 to 6:30 PM. On Monday, November 19 from 4:30 to 7:30 PM, at the Holmes Tuttle Clubhouse, 2585 E. 36th Street (west of Country Club).
7. At 11 AM on Sunday, November 4th, Youth on their Own has their major fundraiser (a Fall Wine Tasting) at Flemings Restaurant. Tickets are $75 each.
8. Andy Kerr reminded us that we have four riders in this year’s Ride to End Polio. We can support them by pledging by the mile or in a flat amount. Checks may be payable to either Rotary International or the Catalina Rotary Foundation. In either case, be sure to write in the memo section that it is for the Ride to End Polio/El Tour de Tucson.
9. Paul Bennett reported that we had 11 volunteers for litter pick up on Skyline between Alvernon and Swan. Breakfast followed at Fini’s Landing.
10. FUNdation Day is from 9 AM to 2:30 PM this Saturday, November 3rd at Skyline Country Club and all were encouraged to attend.
11. Finally Past President Pat Egbert reminded us that he has 3 tickets remaining to Scrooge at the Gaslight Theater on Wednesday, November 28th at 7:30 PM. If you haven’t paid, please pay Pat directly.
Werner Kruesi introduced the ten guests who consisted of Assistant Governor Ann Huber, Adam Lukae (President of Community based Rotaract Club), Al Chesser introduced his brother Steve, Andy Kerr introduced his wife Pam and their new in-laws, Dick and Helen Keagle, Phil Lattava, visiting Rotarian from Canton, OH, Bill and Ursula Carter who are involved in the Mexico project, and visiting Rotarian Mike Tannenbaum from Oregon. District Governor Kirk Reed was also in attendance.

Arturo Mojica earned the right to pick a card for the Queen of Hearts 50-50 raffle but alas he pulled the Ace of Diamonds. The pot is up to $1690. Sales were strong at $114 as the pot builds.

Irv Mindes did his usual stellar job at Sergeant at Arms. He began by raffling off tickets to the coveted U of A v. Houston Baptist basketball game on Wednesday November 7th. Bob DeLaney edged out Anita McDonald in a short but vicious bidding war. Most noteworthy was the fact that Andy Kerr made a contribution to the Foundation for his good fortune in winning the 2005 Corvette at the Tucson Rotary Club’s annual Car Show at the Gregory School.

Matt Matthewson did a great introduction of our program speaker, Dr. Dante S. Lauretta, principal investigator of the Osiris REx to extract samples from the asteroid Bennu (so named by a third grader in a naming contest). Dr. Lauretta went through the steps in this amazing 20 year project which began in 2004 and is scheduled to be completed by 9/30/2025. Some key milestones were getting the contract in May of 2011 (in a competition of 28 teams), launch on September 8, 2016. Dr. Lauretta shared many interesting factoids about the flight engineering, the shape, density and composition of the asteroid and the sheer power needed to get the equipment into space and how the “scooper” works. He also shared some creative programs he has ongoing with the Boys and Girls Clubs of Tucson including board games (one of which won an award from MENSA, an organization I have applied to for membership but am apparently on the waiting list) and a new beer called Bennu Arrival, an imperial stout of 16 ounces, and for sale at Dillinger Brewery on the Northwest side of town with profits from sales going to the Boys and Girls Clubs. This something we can really get behind.

President Bob thanked Dr. Lauretta by giving him a coin with the 4-Way Test and informing him that we would be inoculating ten children against polio in his honor. Bob graciously thanked all of today’s meeting helpers and sent us off with a quote from Walt Disney: “If you can dream it, you can do it.” We had a fine meeting today.

Post Script: Andy Kerr was seen after the meeting driving around the Viscount in his new Corvette with the top down, flexing his triceps and
burning rubber in the parking lot. 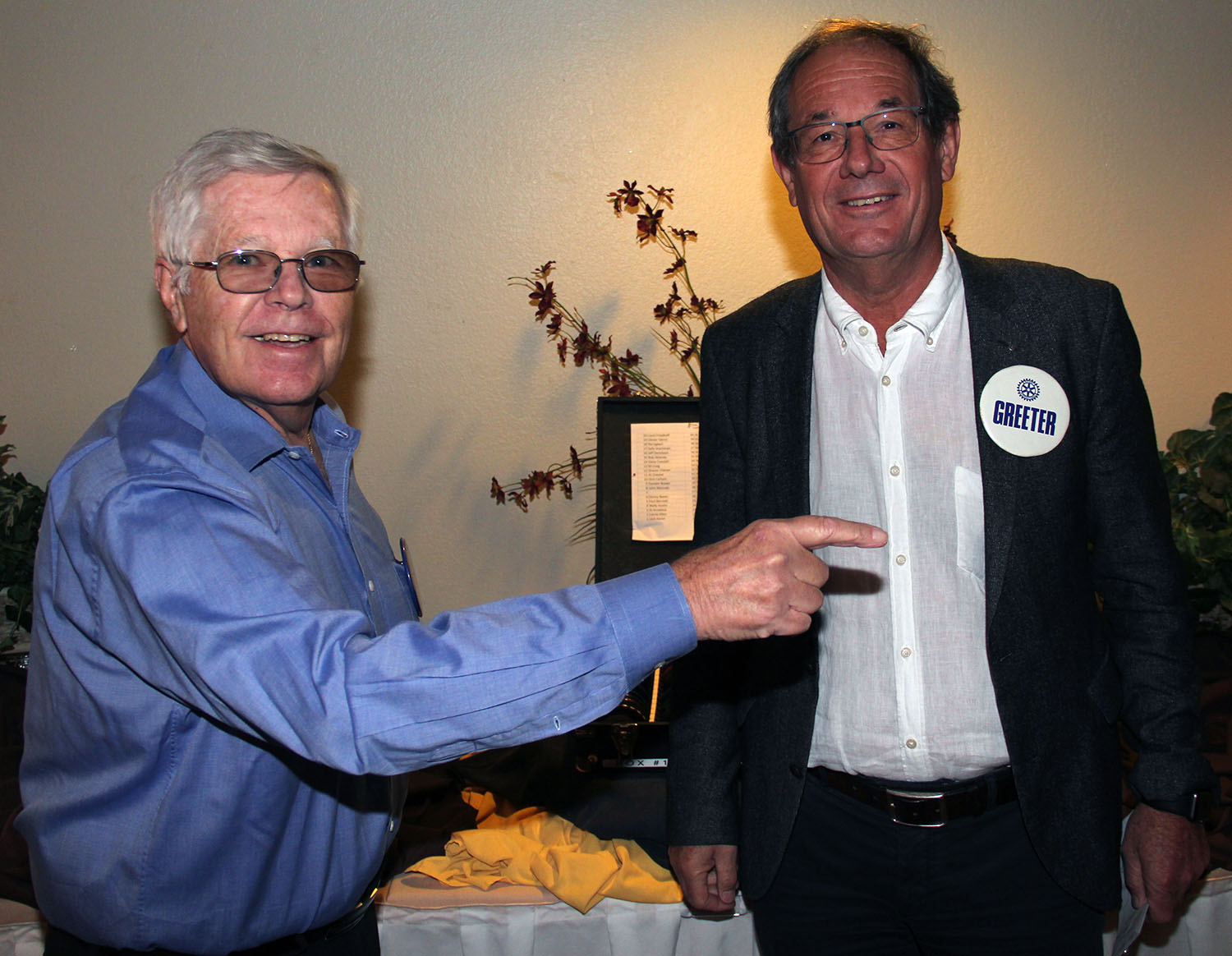 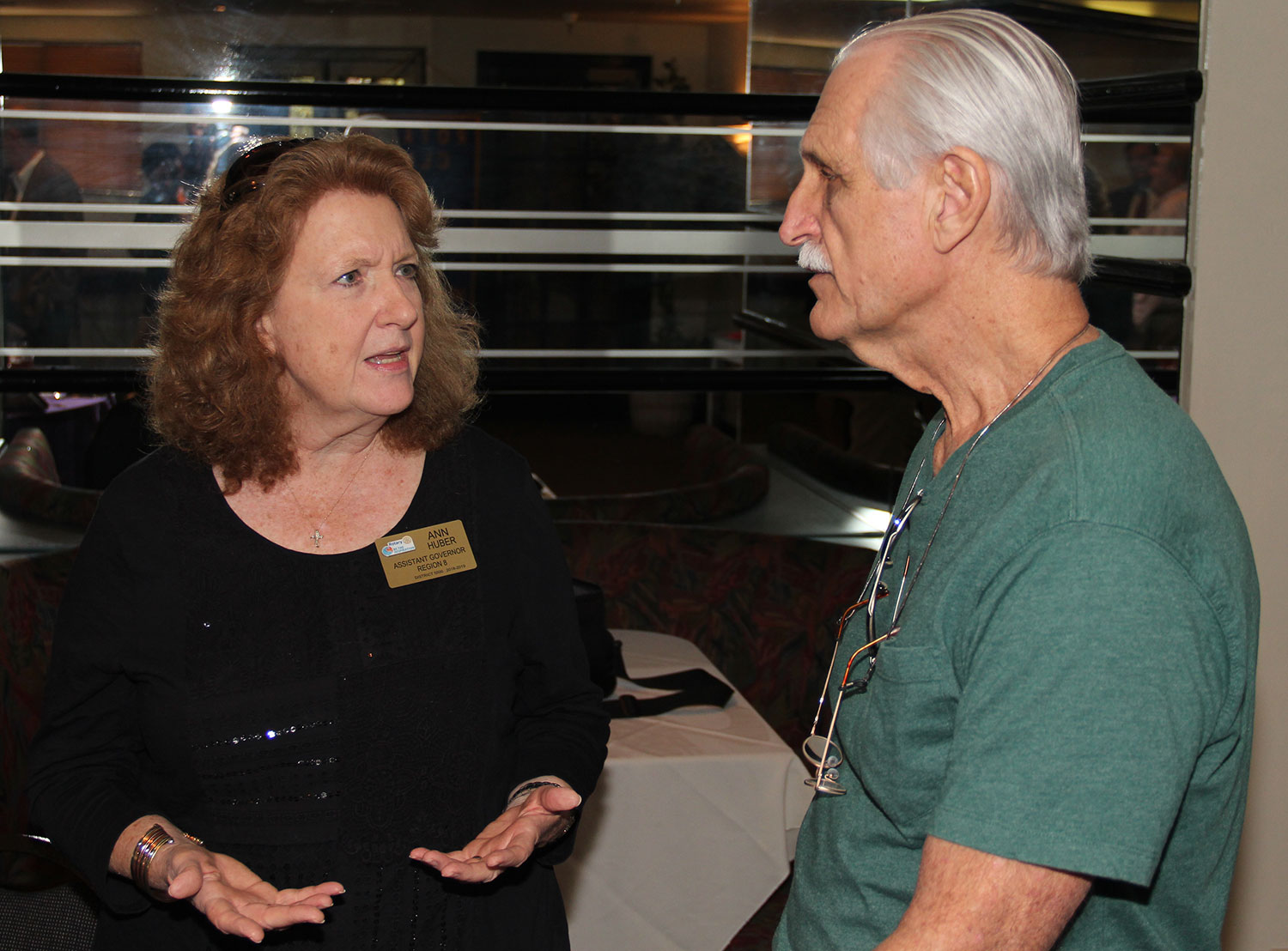 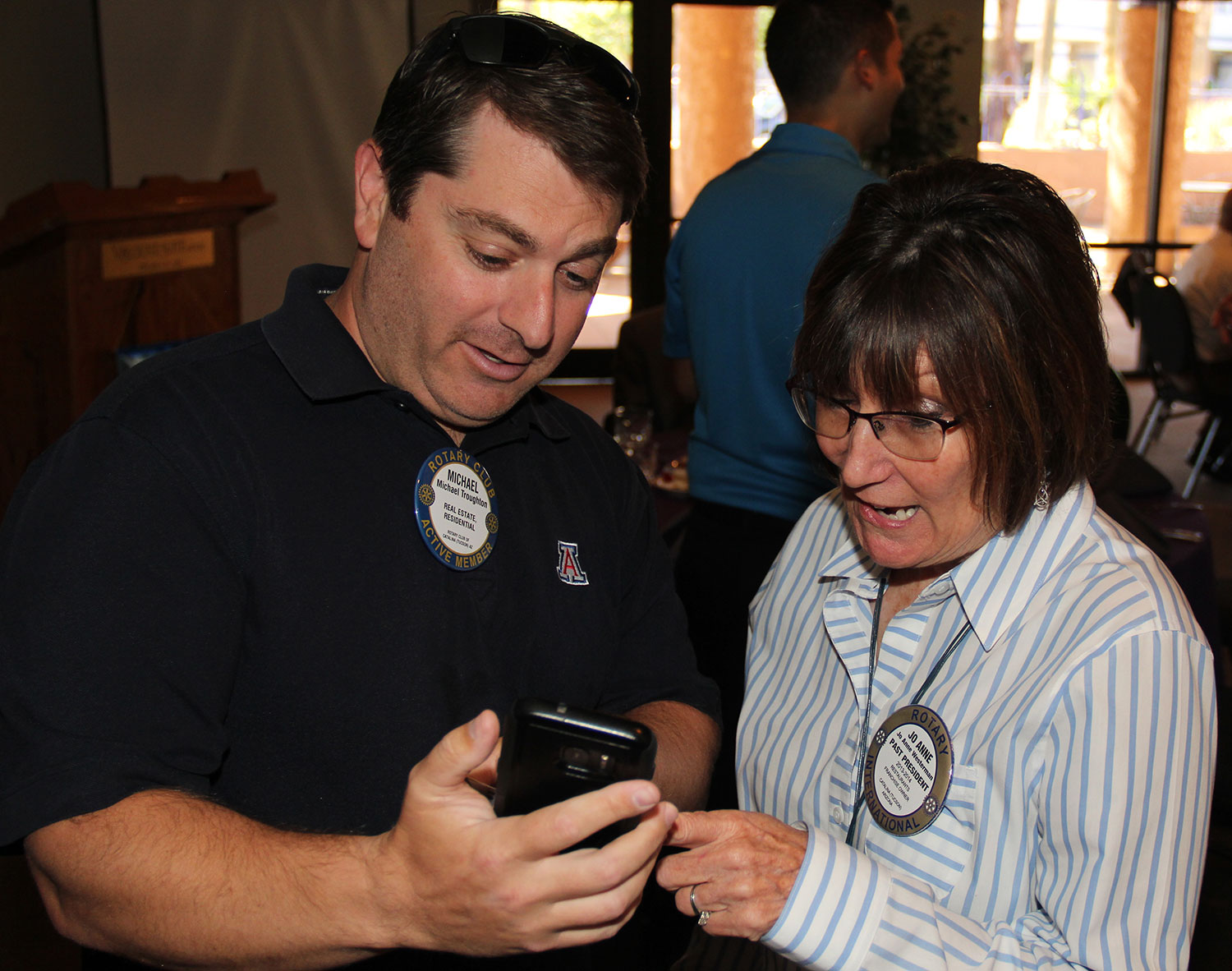 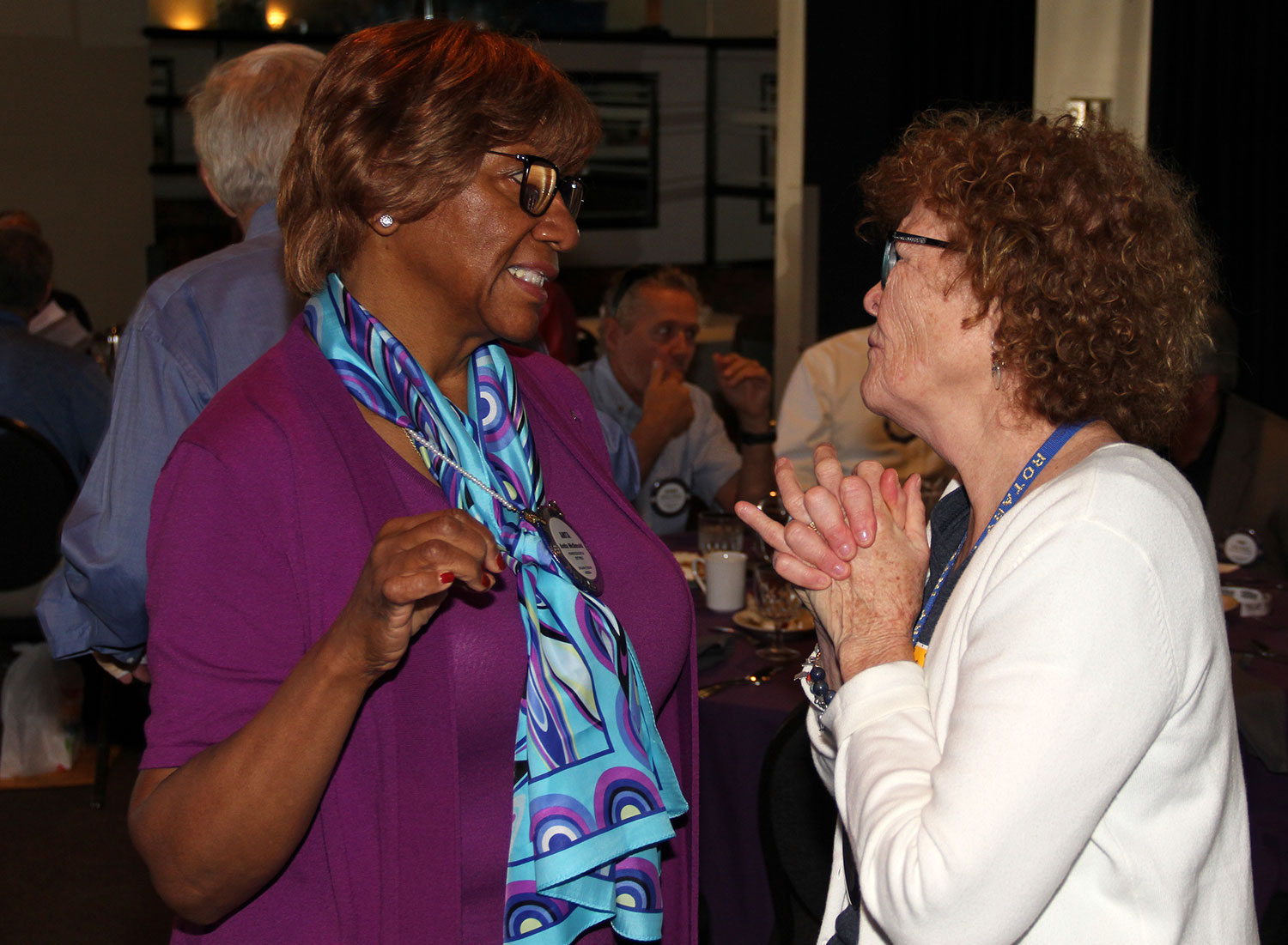 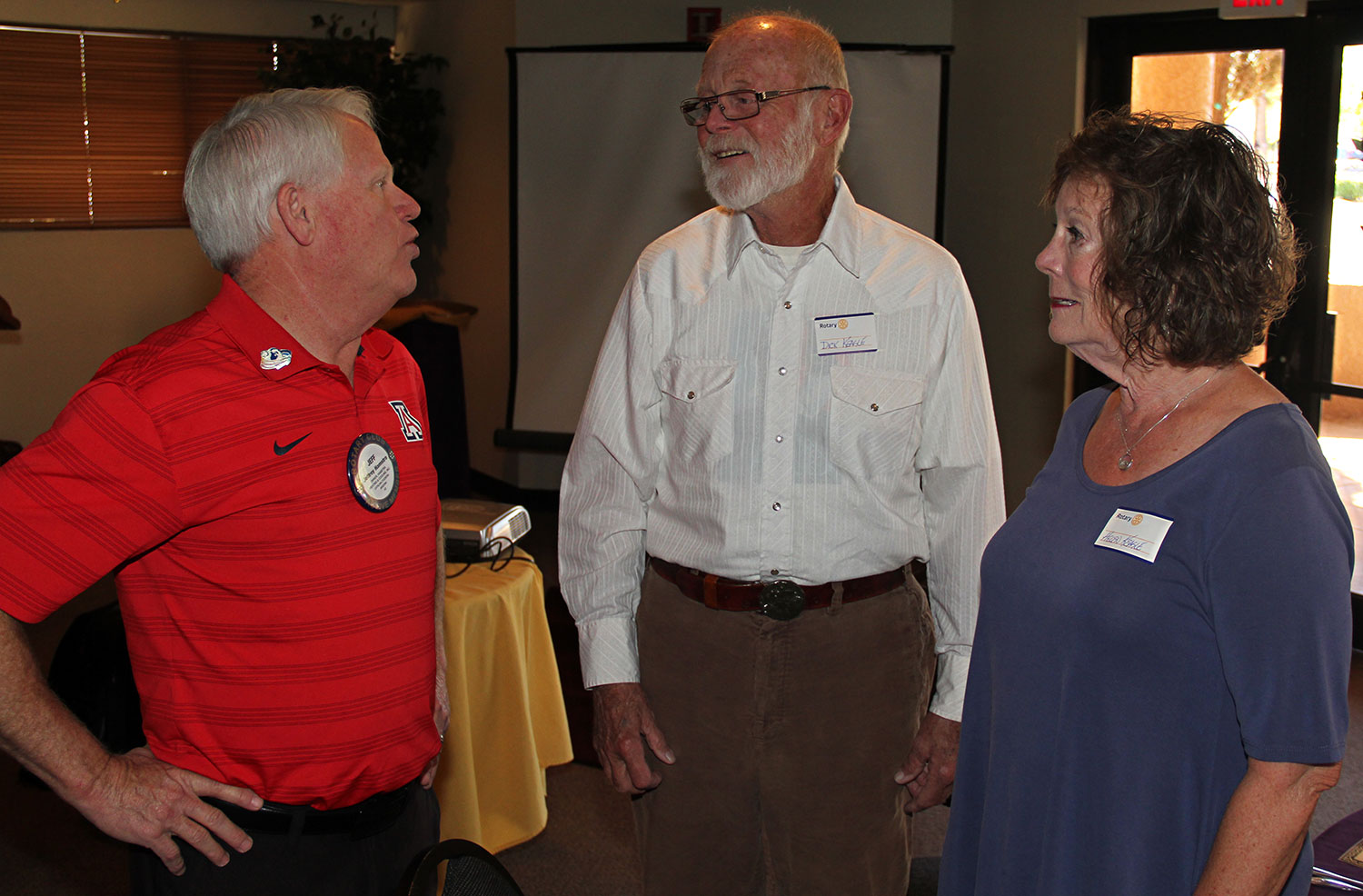 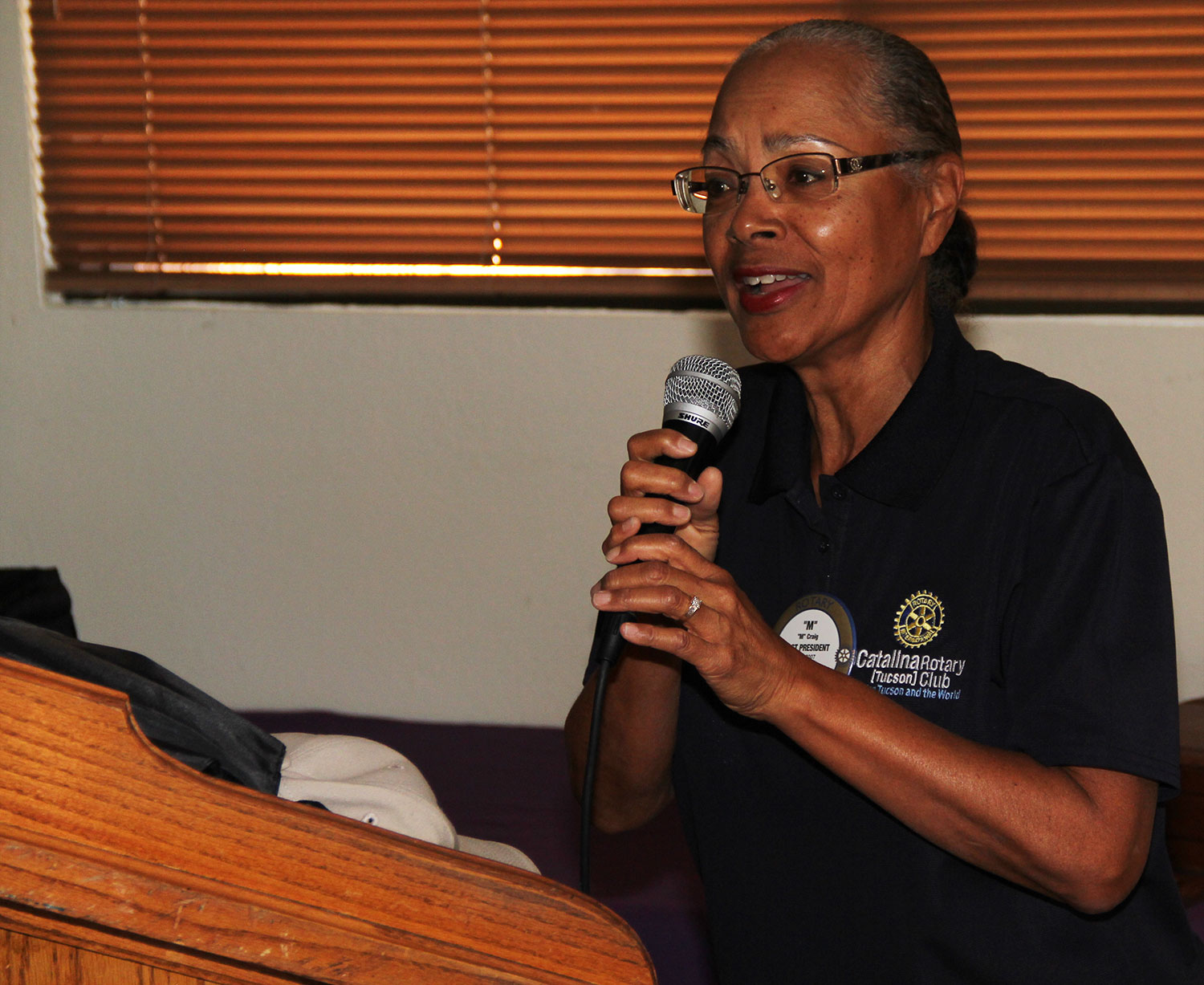 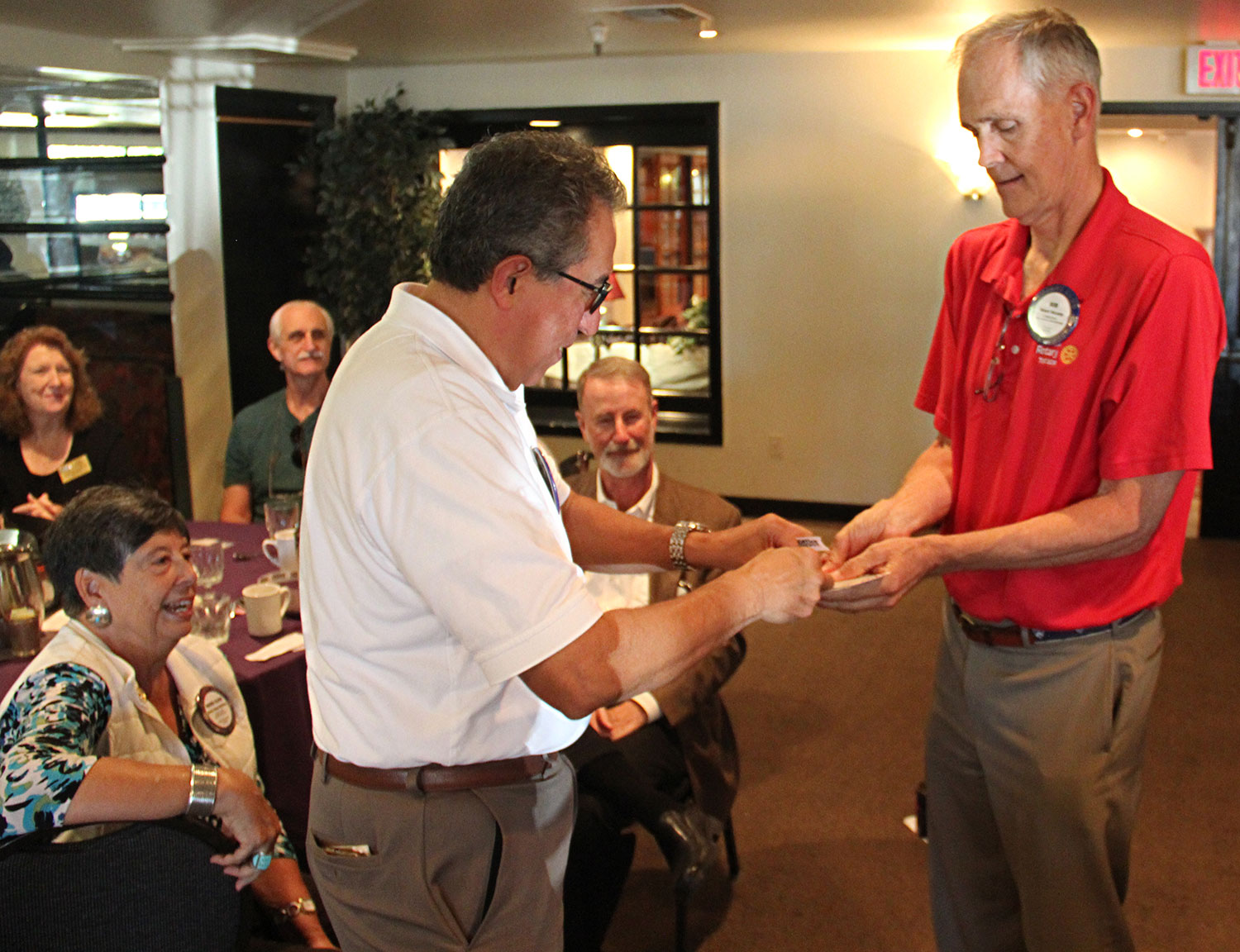 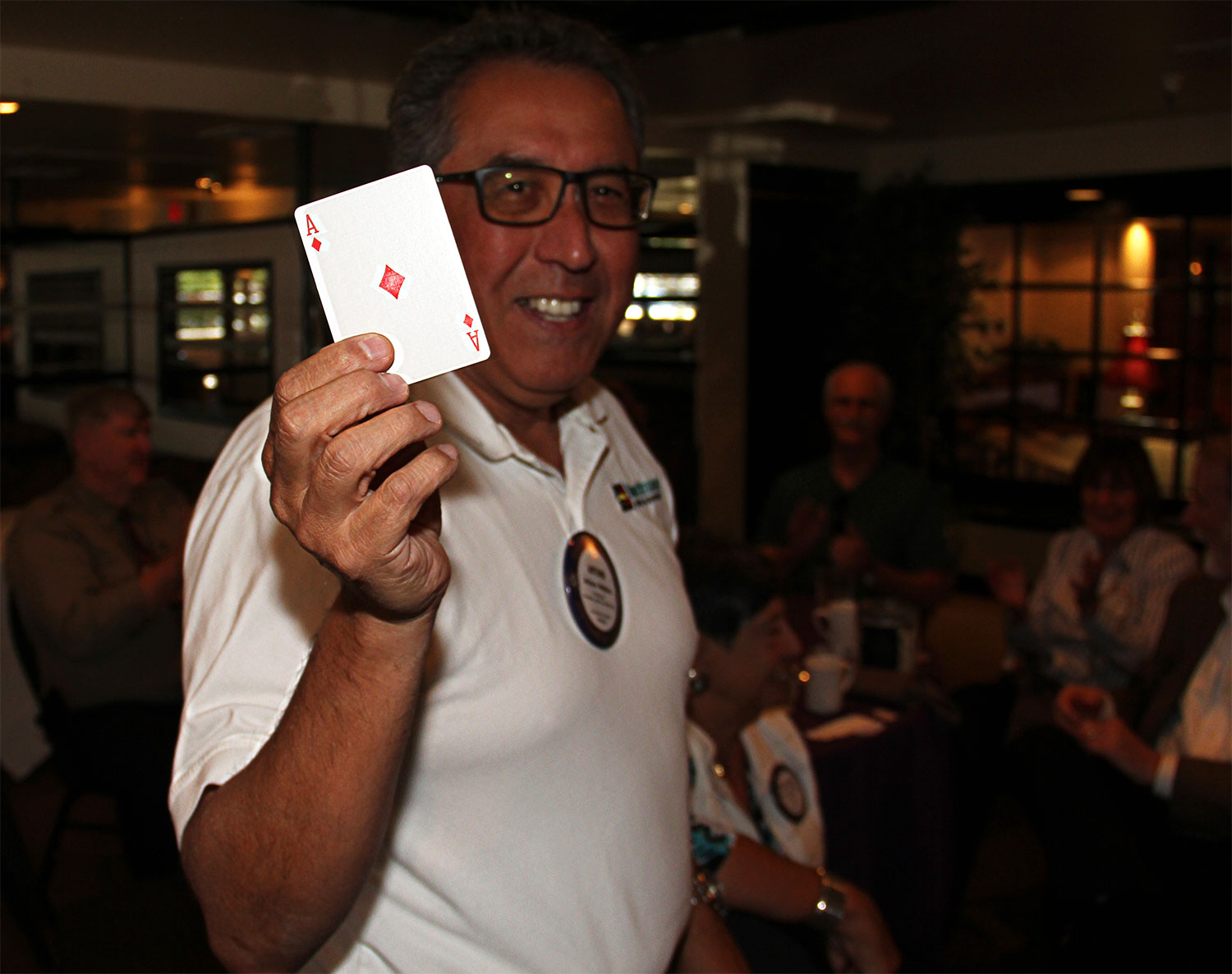 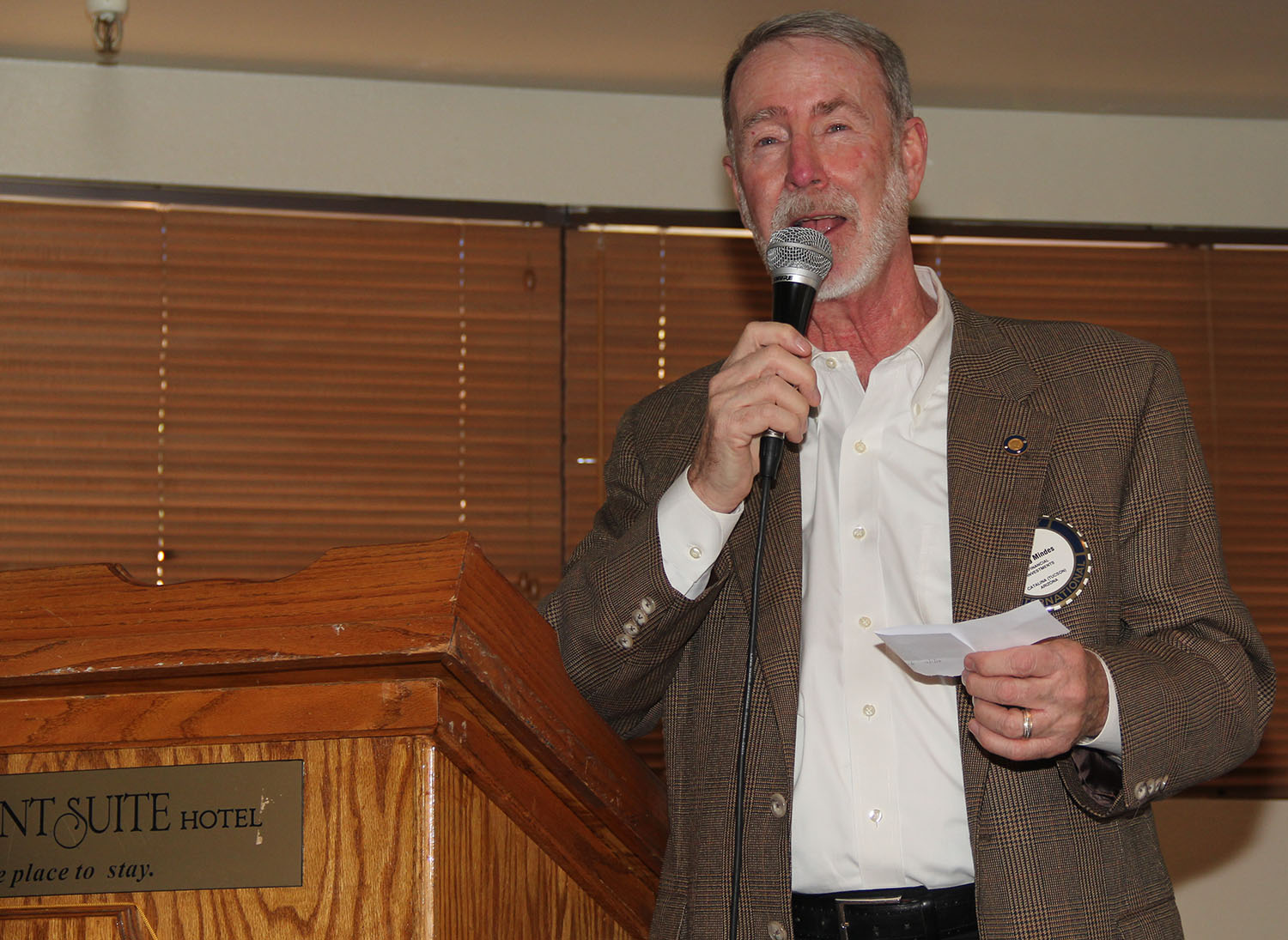 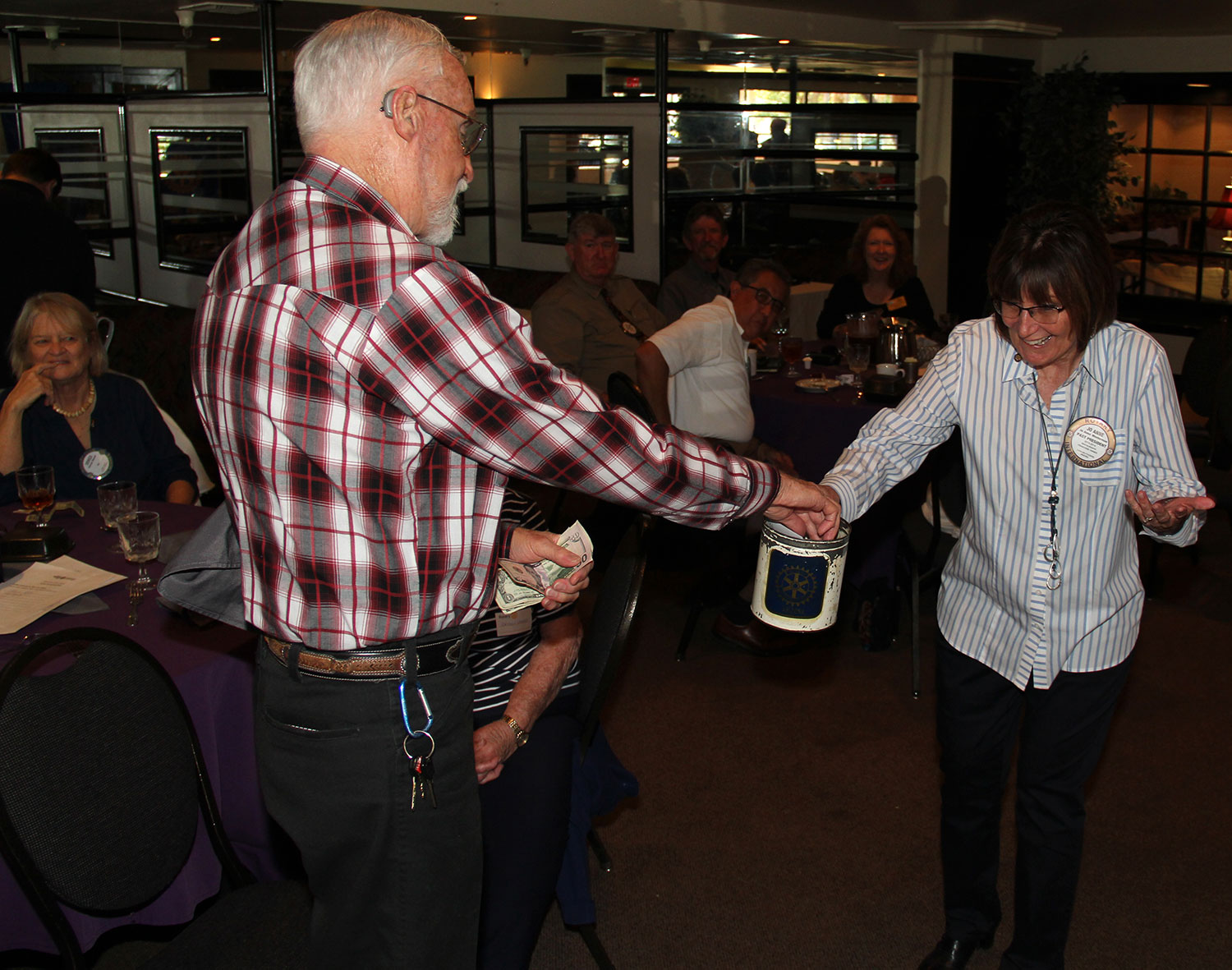 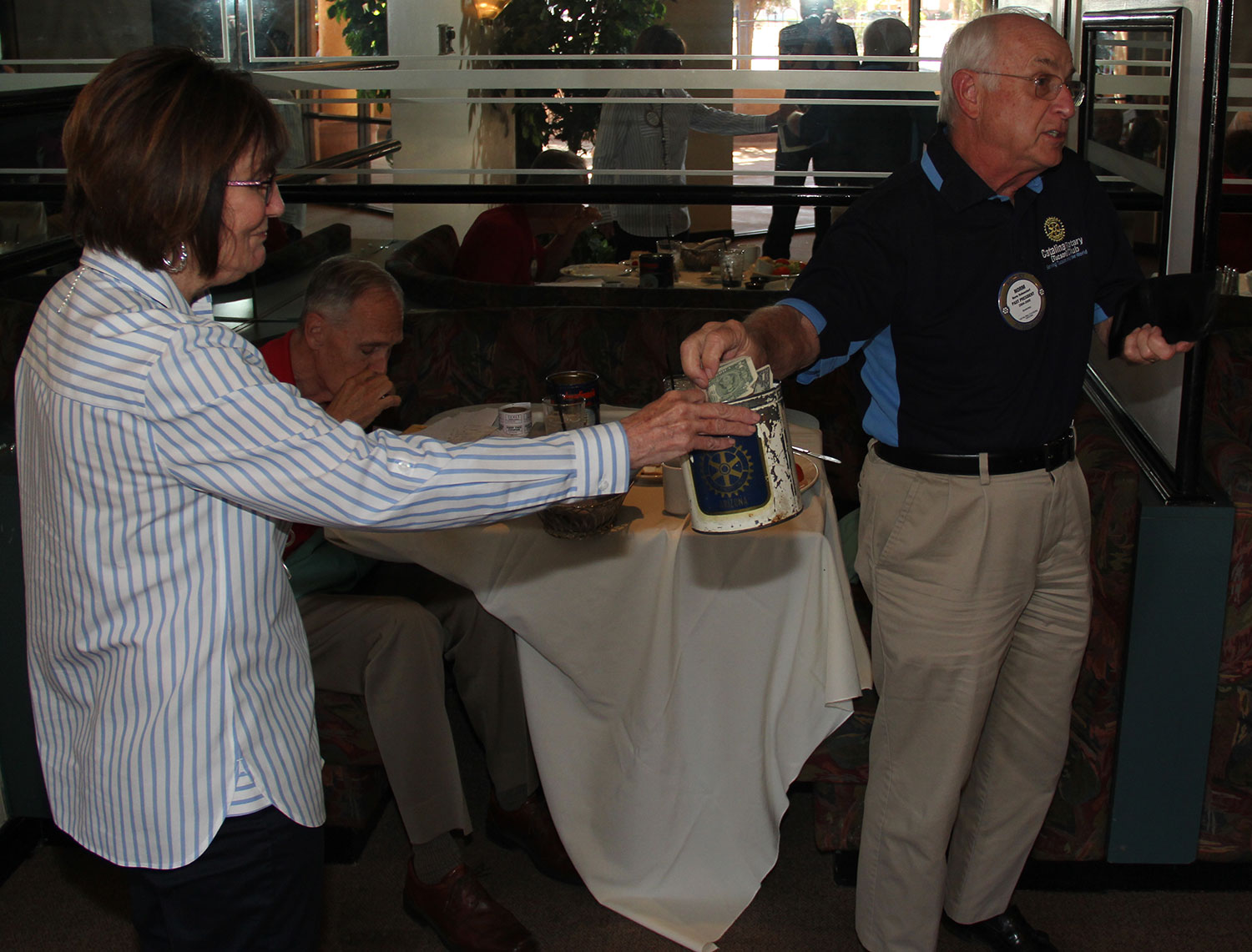 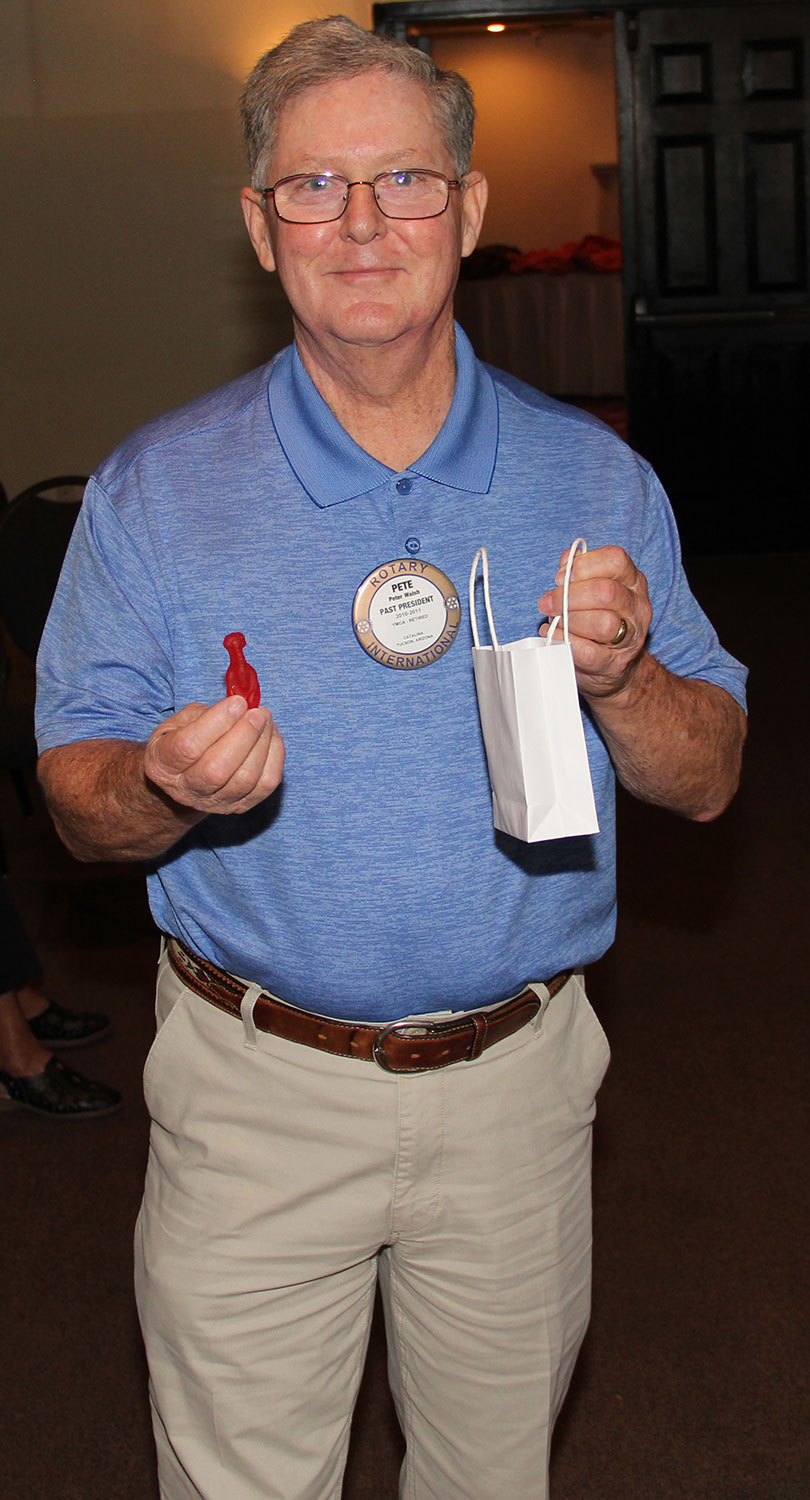 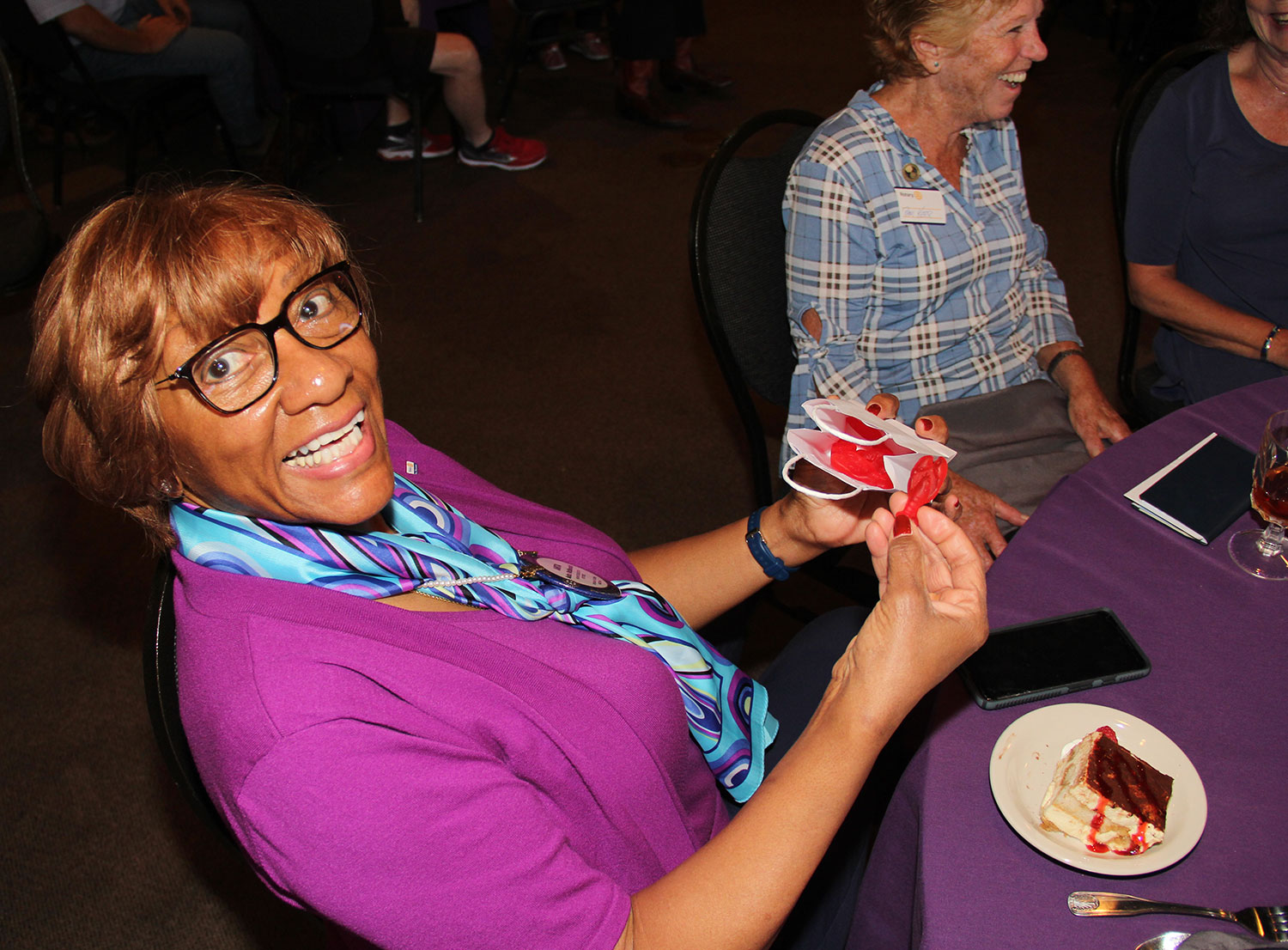 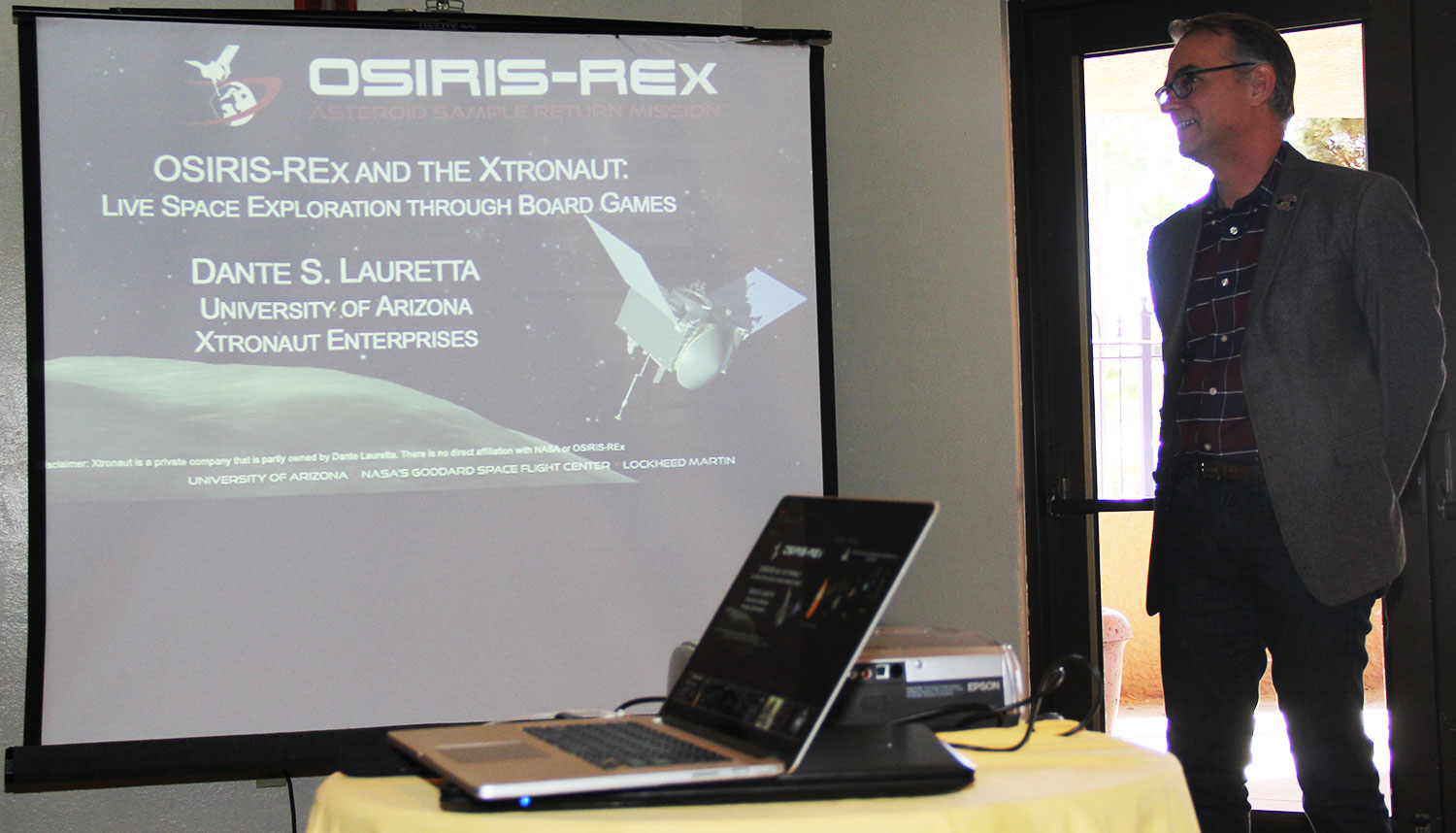 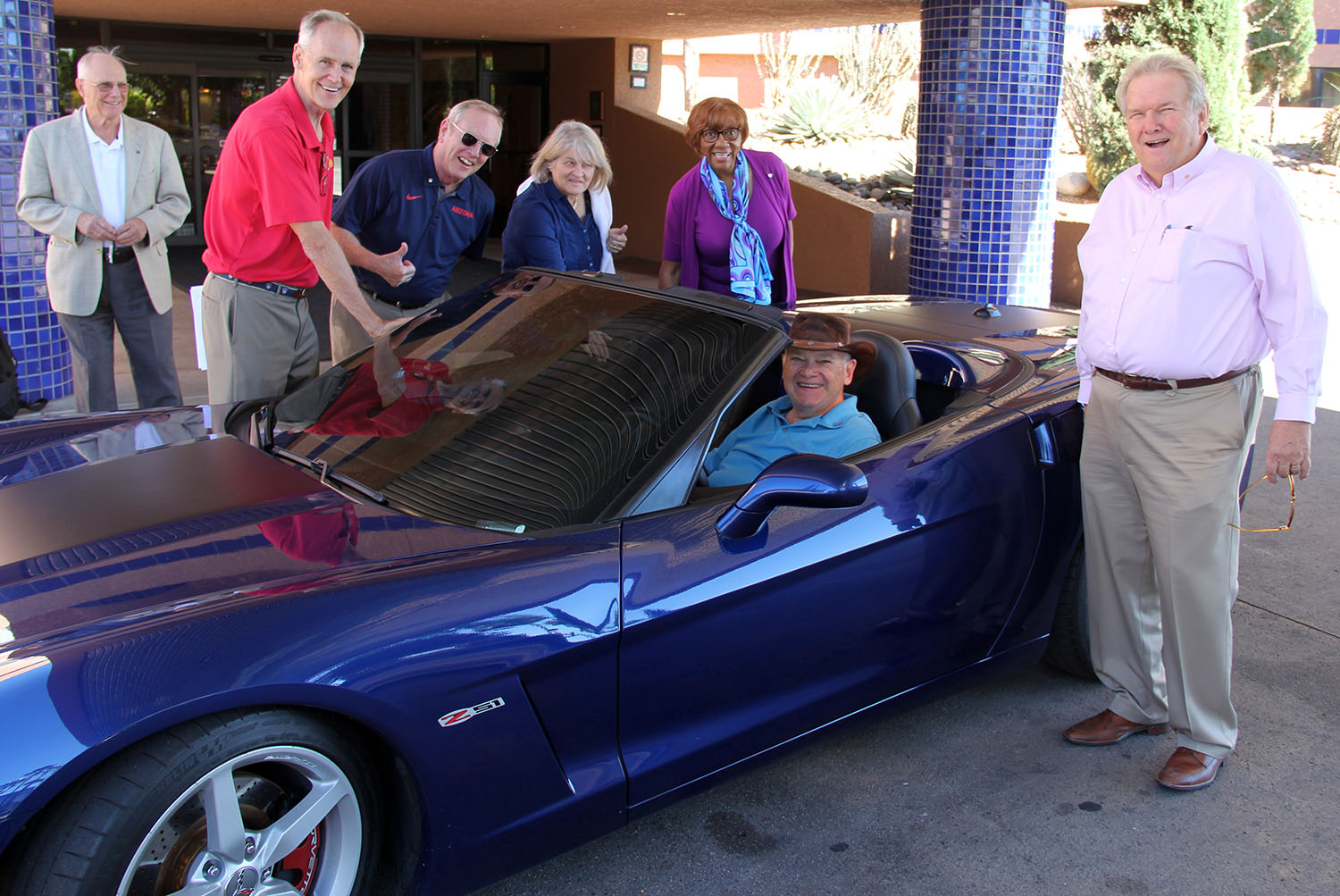 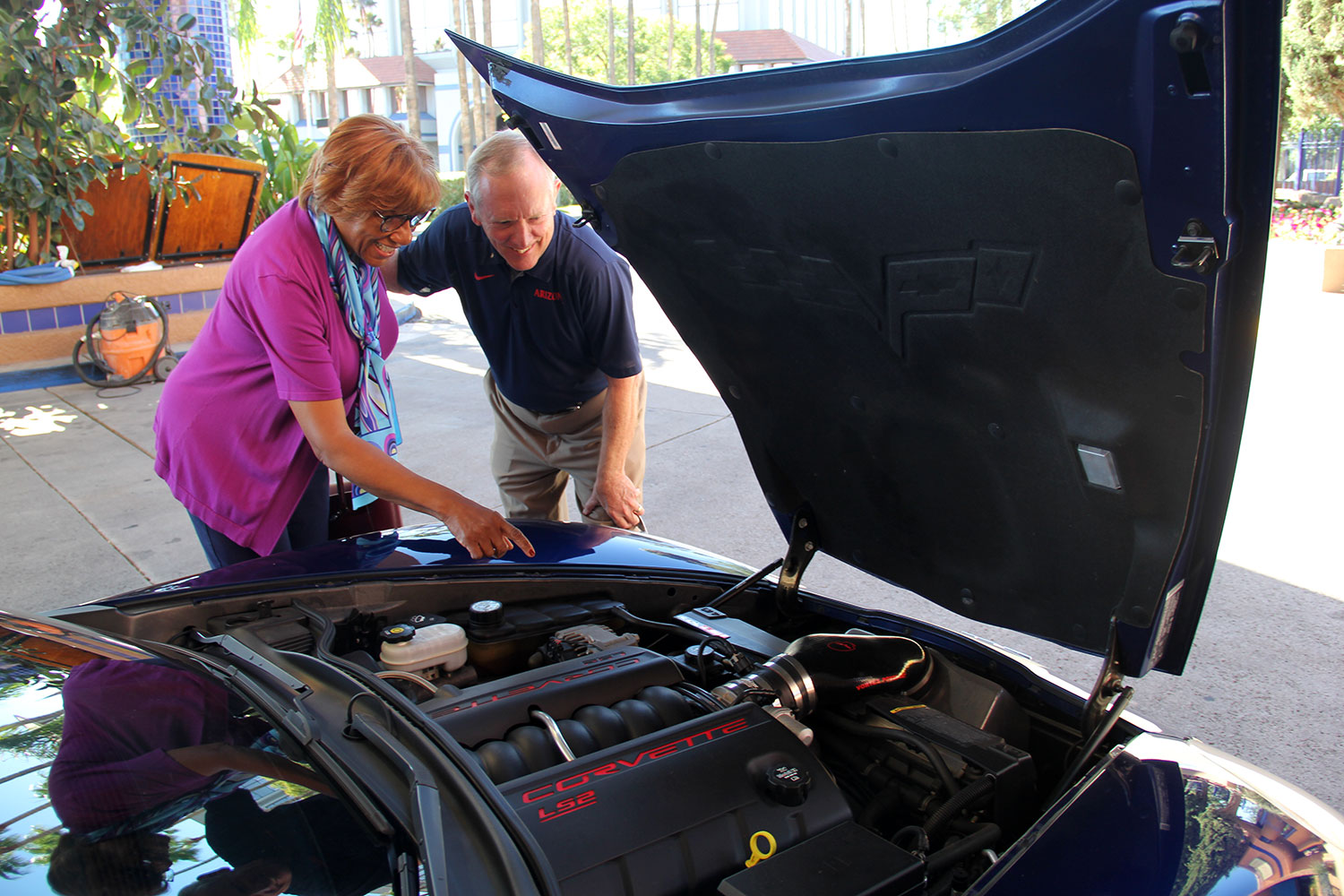