This week featured a presentation by the Arizona Town Hall board chair, big news from District Governor Kirk about District Conference and a nail-biting Queen of Hearts drawing for nearly $1000!

President Bob’s announcements included a reminder to attend the membership seminar, to signup for a role at the meetings and to register for The District Conference scheduled the last weekend in September. District Governor Kirk added that there would be a nationally recognized special guest attending the District Conference so, you’ll want to be there! 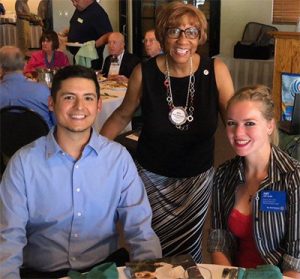 Michael T. announced that the total pot was $987. Norm R. had the chance to walk away with one-half, but came up short. Next week will top $1000 for sure!

Irv was in his usual upbeat and creative mode resulting in a leg up from Andy in honor of his 95-years-young mother-in-law. Tony S. also gave a leg up for the honor of walking his daughter down the aisle. Both leg ups were matched by Irv. Others giving Happy bucks included Bob G., M, Elise, Amy Allen, Mike Drake and Anita.

Mr. Peck stated that the Arizona Town Hall brings together people from different and diverse backgrounds to address specific topics of significance for the community. The 2017 Town Hall addressed “Funding PreK-12 Education“ and the “Criminal Justice System” is the topic for this year.

There are three unique things the Arizona Town Hall does around each topic to be addressed:

The Arizona Town Hall does not take a stand or express an opinion on any of the topics. Their role is to gather the data, bring a diverse group together to develop actionable items.

Currently, there are over 30 community town halls scheduled on the “Criminal Justice System” topic.

Past Research Reports and action items are on the website; aztownhall.org.   The November 2019 topic will be “Healthy Communities.”. Let Mr. Peck know if you are interested in participating at hankpeck@gmail.com.