District Governor Joe Hentges made his official visit to Catalina Rotary Club this week amidst exciting announcements about our annual club holiday party and a big “Night Out” at The Fox Theatre Tucson. 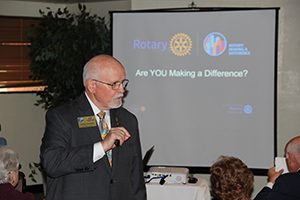 There was a great deal of chatter and excitement taking place when President Pat called the meeting to order at 12:15. Following the Pledge of Allegiance, Phyllis James gave the Invocation. President Pat then called Norm R, today’s Greeter, to come forward and introduce guests.

Norm began by giving a special welcome to Brigitte Hinges, wife of the District Governor, and asked her to stand to be recognized. Although in attendance with their spouses, Norm invited both PDG Sandy Goodsite of the Pantano Club and PDG Pam Kerr of District 6440 (Chicago area) to introduce themselves. Frank Presson introduced his lovely wife Jackie and we welcomed back PDG Merle Anderson, District 6000 (Minnesota) for the winter. We had a full house of Past, Present and Incoming District Governors and all were asked to stand.

The Queen continues to rule as Bob Grady pulled the King of Hearts in his attempt to win one-half of the $990 pot. Next week will surely provide a winner over $500.

President Pat, DG Joe Hentges and Club Foundation Chair Al Chesser invited Jackie and Frank Presson to come forward. On behalf of the Rotary Foundation Trustees, they expressed appreciation to Jackie and Frank for their humanitarian and educational initiatives that have made a difference around the world. The Pressons have been consistent donors since 1996 and on this day they were being recognized as Major Level Four Donors. With gratitude from the Foundation, Frank and Jackie were presented with a crystal, pins and a pendant.

Frank shared that they were able to reach Level Four as a result of property in NC Jackie received when her parents passed away. They were able to donate the property to The Rotary Foundation and receive a tax donation as well as a monthly income. Frank is willing to explain the process to anyone that is interested.

DG Joe began by expressing how much he enjoys visiting our Club. After he provided a review of the District and 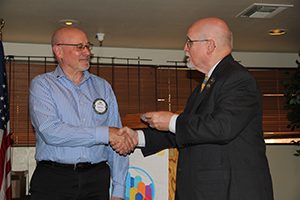 Catalina Club’s history he turned his focus on the importance of having a strong club membership. Key elements important to members are helping local communities and international initiatives, friendships, and fellowships which lead to stronger member relationships and member loyalty. Strong Clubs usually have a member that is the“Energizer.” DG Joe then surprised Bob Grady with the Club Energizer Award for serving as the President- elect, Secretary, Chair of the Administrative Committee, using technology to cut down on paper flow and his overall outstanding support to the Club and President Pat.

DG Joe also presented a Certificate to Past Prez Anita in recognition of the Club’s outstanding efforts during 2016-17 in support of the Ride to End Polio Now.

DG Joe continued to speak with great enthusiasm and energy as he presented his Roadmap to Our Future which included; Developing Club and District Leadership, Supporting Youth Serving Committees, Supporting The Rotary Foundation and Polio Eradication, and Promoting a Greater Awareness of Rotary.

Since our Charter in 1948 we have given a total of $837,939 to The Rotary Foundation and one-half of those funds have come back to our District

DG Joe’s closing remark was “Don’t hesitate to tell the world of what we do in Rotary.”

President Pat thanked DG Joe Hentges for visiting our club and presented him with a $100 contribution from CRC to the District in support of Literacy, a priority for Joe this year plus an Egbert family favorite book, I Like You.